Now that I have my domain mail set up proper, I'm doing the long agonizing process of moving all my mail to my Gmail account.

This is the way I do it:

1. I created a "backup" account on one of my domains.

2. Upload all old mail via IMAP.

3. Set Gmail to retrieve all old mail via POP. Keeps the timestamps this way. Very handy.

It's actually simple, but man does it take a long time to complete. I have a few thousand e-mails to transfer. Both the inbox and the "Sent" folder.

i am google's dude (maybe)

I am familiar with everything to do with a domain (the dot-com/net/org/whatever) except when it comes to CNAME and MX stuff. A while back I entertained the idea of using Google Apps which allows you to use Gmail itself as your primary domain mail, but I chickened out. Looked a bit too "involved", as they say.

Not to be outdone, Microsoft has Windows Custom Live Domains. Basically it's the same thing as Google Apps in a Microsoft flavor, which is either good or bad depending on your point of view. 🙂

After seeing that, I finally threw down the gauntlet and said Okay. I know just about everything else to do with domains. How hard can mail exchange records and CNAME's be?

I signed up for Google Apps. Modified the CNAME and that worked.

But then came the MX part. Seven, count 'em, seven MX records need to be input into your DNS record just to get the mail working.

Upon attempt to do this I got totally confused so I had to send a support ticket to my host's support center. Modifying the MX is possible but I've never done it before so I want to make sure I get it right the first time.

Because if not - none of my mail will work. That would be bad. 🙂

I'm waiting back on a response and hopefully will get this up and running. Then all my domain mail will be Gmail based if all goes well.

I was able to successfully apply all the MX records and ta-da, I now have Gmail as my primary domain mail. Check it out (click the image for larger version). 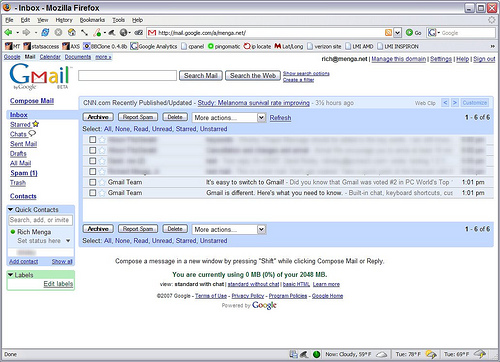 Google, you rock. I love this.

on things i did and didn't do

I have a Linux DVD to finish this week. Actually, this isn't in the "didn't do" category, however I want to list it anyway so I get it done nice'n'early like I want to.

I was supposed to mail out something I bought a friend a while ago last Saturday. Didn't do it. I'm going to mail it out this week. Today, if possible. Done.

I have been so unbelievably lazy concerning my own biz site. If you go there, the same stupid notice "coming soon" is present. It's been like that for weeks. That shall be done this week.

Per my music, I actually have been doing stuff, but not what I should be doing as far as I'm concerned. While it's true you can't capture lightning in a bottle to open whenever you wish, you can at least do something even if it's not perfect, musically speaking. I want at least a few tracks done before week's end.

My apartment is a wreck. Again. Was going to clean it yesterday. Didn't do it. What's sad is that it only takes me about ten.. maybe twenty minutes tops to clean it.

There is one thing I can say I did today thus far as of this writing. I had a phone conversation with a friend (probably ex-friend by now) last week that went very sour. I said things I shouldn't have said. As much progress as I've made becoming more tactful and understanding with people, I had a bout of regression.

Side note: I'm not known as Mr. Tactful whatsoever - but at least I've been getting better at it. Trying to, anyway.

So I wrote an e-mail to that possibly-still-friend, apologized (said sincerely), said I was wrong (which I was), made clear to note I don't deserve forgiveness (which I don't), and well.. this is a part of the e-mail I sent, which I think says it all..

I know you tried everything in your power to make me happy. I recognize that. But I'm too much of an idiot at the present time to truly appreciate it.

I said "at the present time" because I am sincerely trying to appreciate the good things people do for me more often. Most of the time I think I do all right, but I do have to continually remind myself that:

No one has to be nice to you.

When someone is nice to you, don't take it for granted. Always say "thank you" (and mean it).

When someone does something nice for you, once again acknowledge it with thanks.

When someone calls just to say "hello", yet again be thankful, because...

What if no one called?

What if no one cared?

My life lesson learned is that I shouldn't dismiss anyone who actually gives enough of a crap to actually check up on me from time to time.

So no matter what response I get, if any, at least now I understand what that friend was trying to say to me.

All is right with the world once again. The friend called. We talked a lot and worked things out. I was very happy about that.