Above: The newest electronic device in my apartment - a plain ol' radio with a cassette deck in it. And yes, it's new. I can't believe they still sold things like this. Cost was ten bucks.

I've been meaning to get a radio for some time now. I figured since I get such great reception from the rabbit ears I'd probably get decent FM reception too. I was right - I do.

I get the same giddy feeling from free radio as I do from free television, that being it doesn't cost me a cent.

The radio is tuned to classic rock (of course) station 102.5 The Bone. These guys play a really decent mix of the rock I grew up with. And the DJ's aren't annoying which is a huge plus.

as the earth moves

Yes, I decided to head out to Ft. De Soto this morn'. Well worth the trip, I got some good shots. 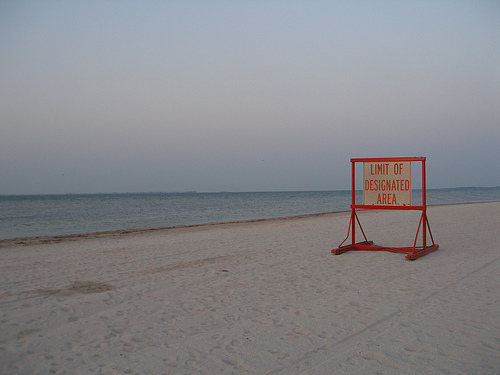 Above: I really, really dig this shot. There's just something about it. 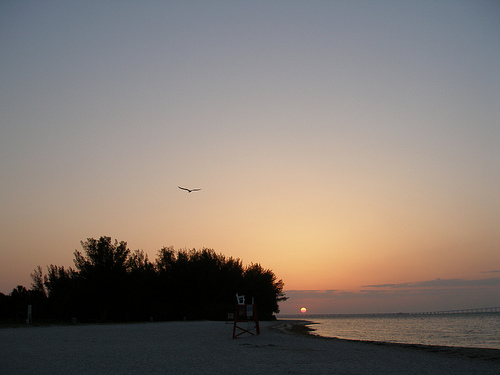 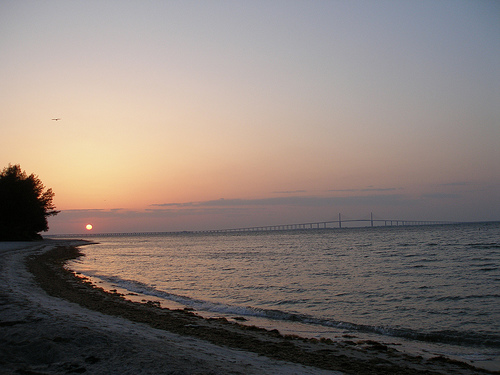 Above: Two shots of the sunrise. In both I was able to catch a bird in flight. Always like it when I can get those.

I've decided not to buy tires at this time. I had Pop call the installer and they started feeding him a line of crap. The previous price that place quoted magically jumped by over $100. The excuse given is that since I have a truck, I should have "light truck" tires instead.

I'll probably end up buying from Tire Rack later on as I always do. I thought I might have done better buying from an installer this time 'round, but that presto change-o price shift reminded me why I stopped buying from them in the first place.

I figure that since I have AAA, if I blow a tire I can ring them up and have them switch it out with the spare.

Additional note: It's common in Florida to see many cars with barely-there tread or none at all in some cases. I'm guessing you probably could put 100,000 miles on a set considering the majority of cars never see anything but pavement and rain in these parts.

psa of the moment

To all girls: Camouflage is not attractive. It makes your butt and gut look fat and your chest look small. Stop wearing it. Thank you.

fluffy and with racing stripes 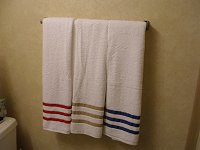 I bought three new towels. They're big, measure 30x54 inches and are made of 100% cotton. In the photo to the right they are all folded twice width-wise and once length-wise. Big frickin' bath towels. Price: About $4.75 each after tax.

Why the racing stripes? Because it looks better than plain white. Over the years I've discovered the best towels are always white. Dyed ones fall apart quicker and don't dry as well for some reason.

Generally speaking, most people have crappy towels and I honestly don't know why. The ones I bought are only about one dollar more than the generic skimpy ones and as mentioned above, they are huge. And soft. Soft is good.

I figure it's my place and I'm the only one who uses the shower, so I might as well live it up with some good towels.

It's 4:30am as I write this. Sunrise is at 6:37am. If I leave an hour prior to that time, I can go there get some more sunrise photos. Traffic will obviously be non-existent - one would think. Right now I'm debating whether I should go or not. Most likely I will. Total cost to get there will be the fuel I burn up plus eighty-five cents for tolls.

Speaking of photos, I've been meaning to put together a collection for sale, such as in a calendar. It's easy enough; all I have to do is get twelve photos of picturesque things and/or places in Florida.

I could also just post my photos as art for sale. The place I use to do those things offers the service, so.. maybe I'll do just that.