On Friday of next week (May 28) I will most likely be doing a one-hour live show. It's going to be for my YouTube crowd so the main topic will be guitar and music stuff, but you can talk about whatever.

The engine of choice I'll probably be using is Ustream because I'm used to the way it works. I can also admin the chat easily because I can do it old-school IRC style and that works the best.

I have a Livestream (formerly Mogulus) account, and I discovered recently I had two really, really old test videos in there that I posted a year and a half ago. I go in there to delete, and.. how do you do it? It doesn't say. I had to go to a search engine just to find out how to do it. Yeah, that sucks.

The Livestream interface is by far the biggest piece of crap when it comes to broadcasting yourself. It is nothing short of ridiculous how difficult they made the interface. It's also so Flash intensive that it slows down your browser to a crawl.

I have entertained the idea of using Stickam, and might use that instead of Ustream because they have the most reliable feed, but probably won't because I really don't feel like learning a whole new system when there's already one in place I'm very familiar with.

A few words on stream quality

Nobody gives a crap about video image quailty or sound quality as long as they can see and hear you clearly.

There's this magical mystical belief that in order to get more views and a better following, you should broadcast in "HD" with crystal clear CD-quality audio. This is obviously complete b.s.because no amount of video and/or audio quality improvement will make your content any better.

When it comes to video quality, you could be running at 5 frames a second an people would still watch.

When it comes to audio quality, AM radio quality is all anyone requires, i.e. 16kHz.

Anyway, I plan on doing a show next Friday and will post more updates on it later.

Even though Facebook's privacy policies are about as strong as a wet napkin, I did not delete my account. Instead, as I mentioned before, I shelled it. The only reason I did this is just in case anyone wants to contact through that medium.

After not logging into FB for close to a week (I had no reason to after shelling my profile), I logged in to see what people were blabbing about.

I noticed something interesting.

People were a lot less forthcoming with what they wrote. The conversation on the walls there is so generic now you could replace every word with X and it would read exactly the same way.

This says to me that people simply don't trust the system; they're all too afraid to write anything too personal for fear the information might be leaked out somewhere.

The glory days of Facebook, if there ever were any, are officially over.

an example of what influences my playing style

Periodically I'll make a video that has some serious funk to it. Obviously my funk influences aren't from the rock and metal I listened to but rather something else.

This is an example of that "something else."

In the early 90s there was a resurgence of sorts with decidedly black R&B music. One shining example is the girl group En Vogue with the song My Lovin' (Never Gonna Get It).

Right, yeah, I understand - this is not the most manliest of admissions - especially for a pasty white guy such as myself that plays a Strat. I don't care because the song is awesome.

This is the video for the song, and I apologize in advance if it gets yanked from YouTube in the future - which it most likely will. If that happens, go to YouTube and search for the song there.

The first thing that sticks out is the booming bass guitar track. It's purposely overdriven slightly (either that or big-time compressed) and it works.

The beat is your typical early 90s electronic/analog drum track for R&B of the time.

The flute you hear is dry as a stone - also works.

The guitar heard right from the beginning of the song are little two-string funky licks. It's not a Strat but probably a semi-hollow bodied guitar that makes that sound.

In a few parts you can hear a Rhodes-style electric piano. Unless you're specifically listening for it you'd never notice - but it's seriously cool sounding.

The voices are almost dry as a stone. There's some very light reverb there. Or it might actually be natural reverb from the recording room.

This is one of my most favorite music videos of all time because it's very rare that one is executed in a way that works like it's supposed to.

Matthew Rolston directed this vid, and as far as I'm concerned Matt is a god because of the way he put the film together.

They are seen in two different ways:

In the silver dresses scenes, Matt did something really interesting. He put them in front of a blue screen, left it blue and didn't bother putting in a keyed background. For all intents and purposes this should have looked horrible. It didn't. It worked perfectly. This is partially due because the lights were not directly pointed at the girls. I'm assuming this was to add interest to the scene and because the dresses were highly reflective. 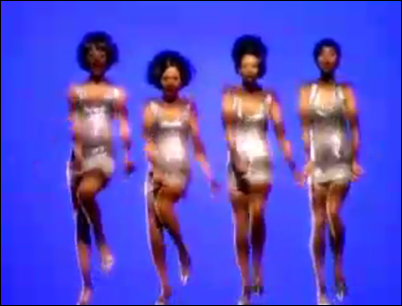 Those are some seriously hard shadows just for effect.. so hard that they literally put stripes on the girls (in the shot above, two of the girls' faces are almost shadowed out completely), but for whatever reason it works.

In the lingerie scenes, Matt used black-and-white but added in a blue tint: 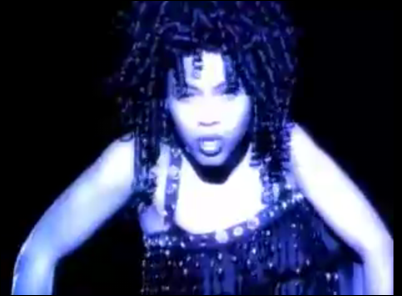 I'm guessing the reason he did this was to match the silver dress scenes somewhat that had a ton of blue in them.

Best part of the song, and the video.

Matt did face profiles for this part of the film - and even threw in a disco ball. Worked awesome. Again, he did something that totally should not have worked, that being rapid-fire fade in/outs. That must have been a pain to edit because I'm fairly certain this entire film was editing old-school style, meaning in the cutting room with no digital edits whatsoever. I might be wrong, but I don't believe that's the way it was done in the early 90s because the equipment to do it was still too wickedly expensive back then.

Here's a few shots from the breakdown:

It's the simplicity of the shots that makes it work. When you have women that are naturally pretty, you don't need much else for the shot.

What effect this song had on me

I'll be blunt honest - I don't even know what the song is really about. I think it's supposed to be about a woman's friend telling a man that he will never be able to get her friend back no matter how bad he wants her again. I think. Not sure. 🙂

There is one lyric, or rather a word, that I really do pay attention to however, bop. Yes, bop. I dig it has absolutely nothing to do with the lyrical content and everything to do with moving the song along. Bop is only there the same as a guitar would play a chord. That's just cool.

Anyway, what matters to me is how the song sounds and the video that gave an image to the music.

Early 1990s black R&B was some really good stuff. Lots of funk, soul and the good stuff that makes black music worth listening to.

When I think of black music, I don't think of rap or hip-hop because that crap sucks. What I think of are artists like En Vogue. Classy girls singing classy music with funk and soul in it. That's what makes My Lovin' an awesome song.

If I ever had the chance to play in a backing band for them, I'd do it in a heartbeat because it's the kind of music that moves you.