Living with a netbook, 10 months later

Back in August 2009 I purchased a refurbished Dell mini 10v. I use this netbook almost every day, so believe me, I've put it through its paces.

Over the course of 10 months it's had three different OSes on it. It was Windows XP Home, then Windows 7 (which I miss dearly on the netbook), then Ubuntu 10.04, then back to XP Home.

I've pretty much made the decision that for the life of the unit it's going to stay on XP. However I have entertained the idea of putting Windows 2000 on it just to eke out some extra speed. The only reason I don't is because it's most likely true the Dell proprietary Windows drivers wouldn't work in 2000, and I don't want to waste my time trying 2000 knowing that would probably happen.

I can say without any shadow of a doubt that the mini 10v is the best built laptop I've ever owned. It's never felt like a toy, it's solid in every single way you could think of and absolutely nothing on it has even hinted that it's going to wear out any time soon. I'm very impressed with it. Believe me when I say I use this thing a lot. Not even the keys have shown any hint of the lettering wearing/fading out. It's a very well-constructed unit with good parts in and out.

The primary browser I use on the 10v is Google Chrome. Before that it was Opera. Both run around the same speed, but Chrome's engine has an easier time with web sites than Opera's does. At present I don't even have Opera installed on the 10v any longer.

I don't use IE at all, and as for Firefox I barely use it on the 10v now. If I wanted the ultimate concerning the speediest Firefox, the answer is not to use Firefox but rather a browser that uses the same engine without any of the fluff. That browser is K-Meleon. The reason I don't use it is because it's a bit wonky in operation, plus I run into that "Your browser isn't supported" crapola from time to time on certain sites.

As I mentioned in a previous bloggo, I use Game Booster to shut off any unnecessary services XP runs - and that's been working out quite well.

Would I buy another netbook?

No, for only two reasons:

The next laptop I buy for whenever that happens will be in that specific configuration. Technically anything over a 10-inch is considered "regular laptop" territory, and that's fine by me.

I've been checking out what's on NewEgg, and the configuration I mentioned above is available for almost under $500. That's amazing.

A laptop in a 12 or 13-inch variant as described above with Windows 7 is what I consider to be the ultimate portable computer. Super-light, super-portable, views all web sites easily, runs all apps easily, has better-than-average battery life (around 4 to 6 hours).. it's perfection assuming the build quality is on par with a Dell mini 10v.

The brand I'll most likely go for is a storied one, the ThinkPad. No, not the IdeaPad, the ThinkPad. They're still built with excellent quality, have that good all-business look to them and deliver where it counts.

As for when I'd buy one.. well.. that'll probably take a while. 🙂 That's okay however since the 10v is still and outstanding little laptop, even with its limitations.

Recently I had to perform some work on an older Dell Latitude D531. This laptop is huge and heavy.

As I was working on it, I realized something.

After you've used a smaller laptop long enough, using a big one is just plain annoying. You can't carry it in one hand easily and the battery life is awful (3 hours tops). Sure, it's a full five inches bigger on the diagonal compared to the 10v, but the extra bulk that goes along with that simply isn't worth the bother.

This is why I say the 12 or 13-inch laptops are the "just right" size, physically. They're only slightly larger than a netbook, but pack just as much speed and convenience as the bigger models do. As long as you have a bare minimum resolution of 1280x800, you're good to go.

And said honestly, 1280x800 on a 12 or 13-inch screen is very, very readable. Even those with poor eyesight would be able to view everything on one easily.

Lynx is a text-only web browser. I use it so I can view a web site the way a search engine would "see" it. This allows me to examine my site in a way that graphical browsers can't.

I use a win32 port of Lynx because I'm a Windows user, but its native environment where it runs best is Linux or UNIX. This isn't to say the win32 version sucks, because it doesn't, but for lack of a better description, it "feels" better on Linux/UNIX.

Regardless of what OS you use Lynx on, the commands are the same. Here's a quick primer on how it works. 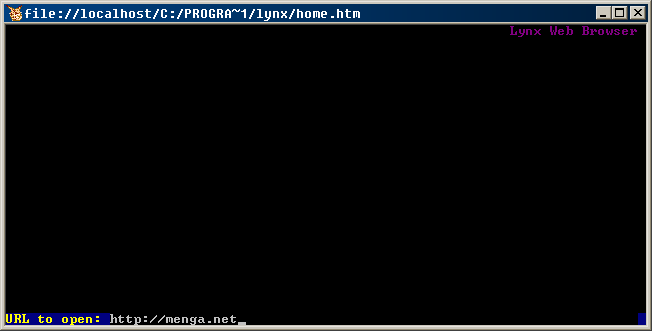 This is done by pressing G, for "go". Lynx will load web sites whether you use http:// or not. 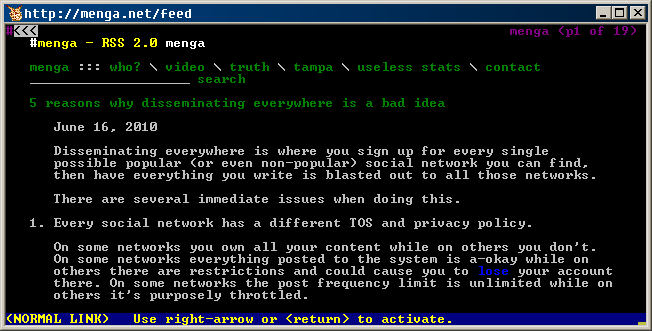 By default, if there is a link "in view", Lynx will always land on that first where you will see (NORMAL LINK) in the bottom status bar.

Moving from link to link is done by using your up/down arrow keys.

Going to a highlighted link is done by pressing Enter.

Scrolling is done by using Insert (up) and Delete (down).

Paging up and down is done by PageUp and PageDown.

Using a form is done by using your up and down arrow keys until you land inside the form, and then using it. For input fields, you type. For checkboxes and radio buttons, you use Enter to activate/deactivate. It should also be noted that when inside an input field, G means literal G and not "go". If you want G to be "go" again, you must move outside of the input field.

Moving back and forth between pages is done using your left and right arrow keys.

Other stuff in Lynx 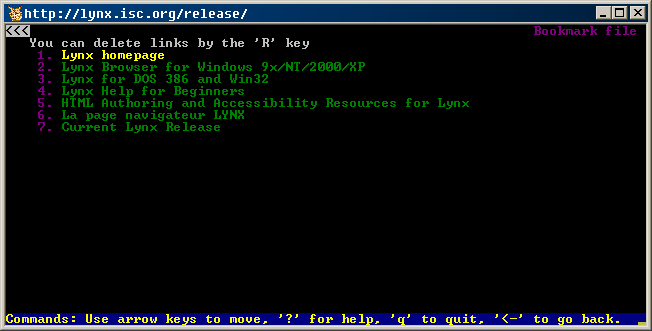 A then D - Add a bookmark

R - Remove/delete a bookmark (must be on bookmark page)

The other keystroke commands can be seen by pressing ? for the help menu. 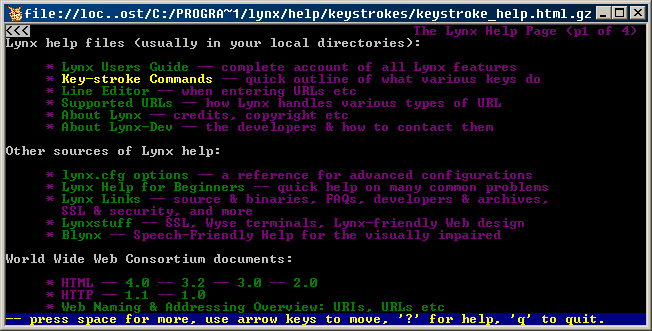 Lynx is a good browser and helpful to use as a website/blog owner or if you just like using for the nerdy fun of it. 🙂

Yesterday I officially upgraded this site to WordPress 3. Here's all the problems that happened:

Shocked? Amazed? Yes and yes. Before upgrading I performed a total backup (entire directory + MySQL db) because I thought for sure something would go screwy, but everything went a-okay.

On the outside (what you see now), everything is the same. It's the admin interface that's way cooler. I do dig the new silver-ish theme; it finally looks like a pro interface. This is neat considering it's a free product. The real kicker however is how it handles image uploads, because I can finally resize and crop properly completely within the web interface. It may not be perfect but it's way better than the way it used to handle them. In addition, I can now edit existing images right on the server and have them replaced without multiple copies of image files.

Here's why this is such a big deal:

I do work with images a lot when blogging, and the be-all/end-all for editing images within a blog editor is Windows Live Writer. No software does it better. The issue was that if I wanted to save a draft, I'd either have to save a local copy or post to the server. If you save local, the draft is specifically on the computer you saved it on. This proves to be annoying because I hop between my desktop and netbook quite a bit. If you post a draft to the server, whatever images you have in the post are non-editable at that point because they're no longer local.

Being that WordPress can edit images direct-on-server, I can now edit posts all within WP because I know if I have to make any image edits, I can do it. This gives me a very good reason to start posting within the WP interface a lot more.

The only thing I'm missing is the ability to add custom borders. Fortunately most of the time all I require is a 1-pixel solid black line, and that's easily handled with a border setting of "1" in the Advanced Properties of any image uploaded to WP.

Here's an example of what I'm talking about. 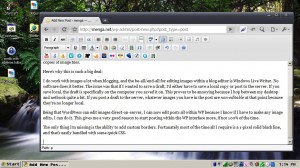 (If you don't see the border immediately, just look at the bottom corners of the image.)

I won't be able to completely give up WLW for blog editing because there are still things it can do better than WP's editor, but the point is that if placed into the situation where I had to use WP and nothing else, I could get along with it very well. Only now does it allow me to do everything I want with no other image editing software needed.

And yeah, that's a big deal.