I use a combination of old and new apps. For every old app I have, I make very sure to keep all that stuff backed up because if you don't, it will vanish and it's unlikely you'll ever find it again anywhere. 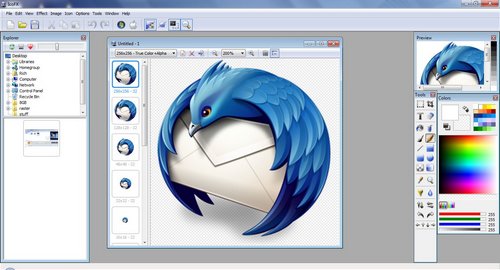 IcoFX is the best icon-extracting/creating utility for Windows. It will even pull icon images right from EXE files. It was formerly released as freeware but now the current version of the software costs a whopping 50 bucks if you want to use it more than 30 days.

I lost my 1.6 installer at one point and feverishly searched the internet for the old 1.6 version. The developer at the time was going to every single site where the old version was posted for download, having them all removed and replaced with the pay-version. I was fortunately able to find the freeware 1.6 version on a German site, downloaded that sucker quick and it's backed up now both to cloud and local copy.

You won't even find IcoFX 1.6 on OldApps or OldVersion, and you'll have a really tough time finding it anywhere on the internet as the author of the software made very sure you can't get it so you have to pay for the new version. If you specifically search for version 1.6, you'll find it listed here and there, but the version you'll actually get will be the one after that requiring you to cough up 50 bucks to use it more than 30 days. 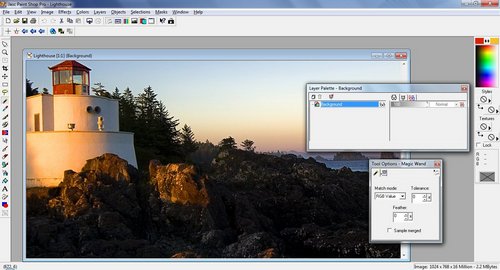 This graphics editing software is 12 years old, and next to IrfanView it is the absolute fastest graphics program you'll ever use. PSP7 is routinely labeled by many as one of the best to use because it's just so quick, has layers capability that's easy to understand as well as a whole bunch of other useful stuff.

When you double-click PSP7 to launch it, whammo, it's done and loaded. Near-instant launch time. GIMP, while nice and free is a sloth in comparison. PSP7 runs just fine on my Win7 64-bit, thank God. If it didn't, I'd be using IrfanView. 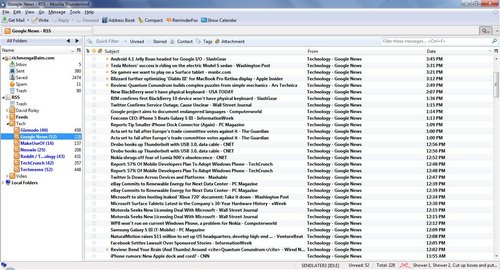 Thunderbird at this point is a complete piece of crap. Super-bloated, super-slow and just plain awful. The last version that wasn't a complete pile of crap was 3.1.20, and that's what I use. Fortunately, Mozilla keeps all their old releases readily available via FTP at ftp.mozilla.org.

Version 3.1 of TB, while not as fast as 2, works like it's supposed to. I specifically use 3.1 because it has add-ons that aren't available for TB 2 that I require. In my backup folder for TB I have not only the installer but all the XPI files for all the add-ons I use as well. TB add-ons have a nasty habit of disappearing off the face of the internet with no warning, so whenever you find one you like, get the XPI installer for it and back it up. 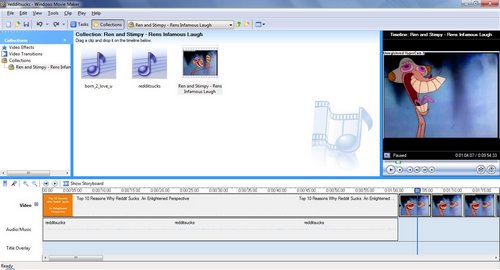 The only reason this software exists is because enough people complained about how much Windows Movie Maker 2011 sucks. In a rare case where Microsoft actually listened to their customers, they relented and released WMM 2.6, a version that works in WinVista and Win7 - except there's no way to capture anything from a webcam to it. But it's better than nothing.

It's available for download here. Save a copy while you can before Microsoft pulls it. 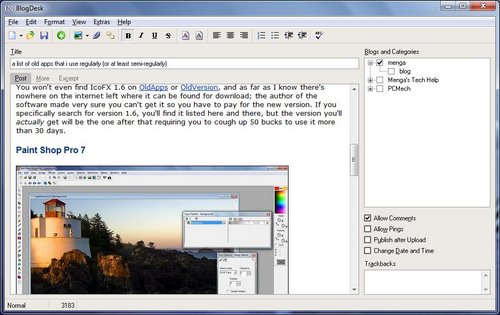 I think, if I remember correctly, that I started using BlogDesk when it was at version 2.6, then upgraded to 2.8 later when it was released in 2009. Since then the author hasn't bothered releasing any updates.

I was formerly a Windows-Live-Writer-'til-I-die guy for my blogging, but BD is just faster and I'm all about speed when it comes to apps. Faster is always better, and BD is ridiculously fast. It doesn't have nearly as many features as WLW does, and there is a bit of a learning curve (like having to edit your own editing template manually with a text editor), but once you get used to it it's the best formatted text blog editor there is.

BlogDesk is for all intents and purposes "functional abandonware". It still works with WordPress with no problem at all, and as long as it does I will continue to use it.

You can get it here.