...and that has made all the difference 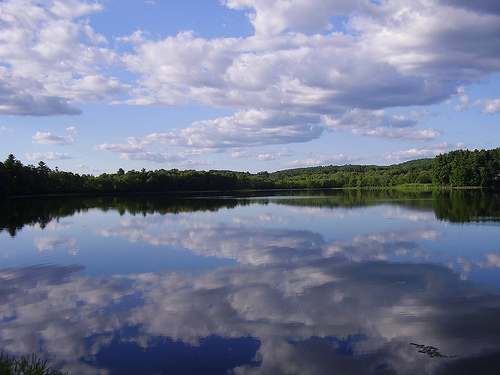 Above: One of the best photos I've ever taken in my life, taken today. Finding where to take the photo (Roseland Park in Connecticut) was courtesy of my GPS telling me where to go.

Who in their right mind would go out driving just for the sake of driving with gas prices as high as they are? I would, that's who. Why? Hmph. The question should be why not?

It was time to put the GPS to the test and do some real driving with it. One of the i3's features is to pick recreational destinations with one of them being parks. Sounded like a good idea. I haven't been to a state park in some time now, much less more than one in the same day. So off I went.

I came to a realization as I was driving around today.

I thought I knew where I lived, but I don't. I hardly know anything outside of my own town.

In addition to the realization, driving around in new places made me think about two things more than anything else. The first one was that I felt really, really small in the big world we live in - and make no mistake, it's huge. The second one was that there is so much to see out there, even right around where you live. I've lived in Northeastern Connecticut all my life, and I witnessed stuff today that I had never ever seen before in my life. What I saw wasn't anything spectacular by any means, but it was just interesting.

Thoughts going through my head were:

I wonder where that road goes... I think I'll take it.

I missed a turn? No big deal.

Wow. I never knew that was there before.

...and so on. I went on at least twenty different roads I'd never been on.

For the first time I drove around in completely unfamiliar territory with no worries whatsoever. I was living the definition of Hukuna Matata.

This all happened within a twenty-five mile radius of where I live. Just imagine how much cool stuff I'll see when I go beyond that. (grin)