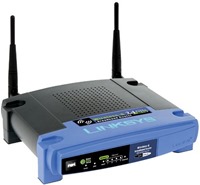 The Linksys WRT54GL (and predecessor WRT54G) is arguably the best damned consumer grade wireless router that has ever existed. I had one before, and the only reason I stopped using it is because it got zapped by lightning (this was before I bought a UPS). My existing router, a craptastic TRENDnet TEW-652BRP, is starting to have problems, so I decided to buy another WRT54GL.

My TRENDnet has the problem where the thing drops connection not when used via wireless but rather when being used plugged in. When I use my laptop at my desk, I use a physical network cable for the fastest possible speed. And no matter what cable or port I use, the TRENDnet periodically just drops connection. Why? Because it's wearing out. When a router starts dropping connection when plugged in, it's time to toss it in the dumpster because there is no fix for that other than replacing the whole port board, and that's a total waste of time and money.

Linksys WRT54 routers basically never have this happen to them because they were over-engineered. They're big, bulky and thick that allows for plenty of ventilation. That ventilation is a key reason why they last as long as they do.

When this router was threatened to be taken off the market, computer geeks everywhere begged and pleaded with Linksys to keep making it because the thing is so good. So they did. The WRT54GL can still be bought new, and is the same thing it has always been, with very little changed about it since its introduction in 2003.

Yes, it is true this particular router at best only does Wireless-G and has no N capability. But that doesn't matter, because it's better to have a solid, well-working G than a crappy N. That, and most people have figured out that nobody really needs more than G.

The vast majority of Wireless-N routers are terrible. I don't even use N on my existing crappy TRENDnet router and haven't for a long time because N is just so unstable. G works perfectly fine and is much "cleaner" than N.

Do I plan on hacking my Linksys? No. All I want is a solid, stable router. The reason that the WRT54GL sells so well is because it is a true set-it-and-forget-it type of wireless router. All that may be required is one firmware upgrade (depending on how long the thing has been sitting in the warehouse before you bought it), and that's it. After that, it just sits there and happily sends/receives data with no complaint whatsoever and with no network choke. And it will do it for years.

Believe me, this thing does not need to be hacked up to work correctly. You can do it if you want, but the point is that it's totally optional. On its own, the WRT54GL is just a rock-solid router.

Mine won't arrive until after Dec 25, and that's fine. I'll be able to lump along with my crappy TRENDnet until my Linksys gets here. I'll be happy to have one again.