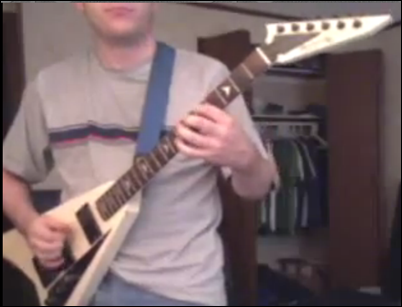 Earlier in the week I owned 7 guitars. Now I own 6. The white V-shaped guitar I owned, "Burnside - The Lance by Guild" was officially tossed in the dumpster.

Here's the quick story of that guitar.

I bought it for 89 bucks originally. I only bought it because it looked cool. It was a white Rhoads V shaped thing, very beat up and had a crack in the neck, but played and sounded OK. Over the years I barely played it. Then one day one of the bridge saddles broke off. I almost threw out the guitar then. My father was insistent that I didn't, took it to a guy and had a new bridge put on it.

One of the bridge saddles broke when I went to restring it. Exact same stupid problem as before. This time I'd had it. I took out the pickups, took off the tuners and threw the guitar in the dumpster. Gone. Buh-bye.

This is NOT going to be one of those things where I'll regret it later because that Guild had always been a piece of crap from day one. It was not worth restoring because of the crack in the neck, the body was beat up, volume pots messed up, it had a wonky bridge (even with the replacement), the jack where the cord went was wonky, blah blah blah blah blah.. nothing on this guitar was ever right. It will not be a guitar I will miss. Not at all.

The Burnside is the fourth guitar I've ever parted with. The first was an Ovation Balladeer that I traded along with an amp and some recording equipment for a synth. The second was a black Phantom Warlock-copy guitar, which for the life of me I cannot remember how I parted with it. The third was a black Epiphone P-bass that was dumpster'd. I don't miss any of the guitars I've junked.

There's this belief that you should never part with a musical instrument once you buy it. I believe that only applies if the instrument holds some sort of sentimental value, has a use exclusive only to that instrument (i.e. "it's the only guitar I have that can get that sound") or has collector's value to it. Otherwise it's just wasting space.

Will I be buying another guitar to replace the Burnside? I don't plan on it. Seven guitars was too many as it was. 🙂