Here is yet another reason I don't like Gmail: It doesn't view plain text messages properly unless you use the Google Chrome web browser and this browser extension specifically.

Hotmail doesn't have a problem with plain text emails: 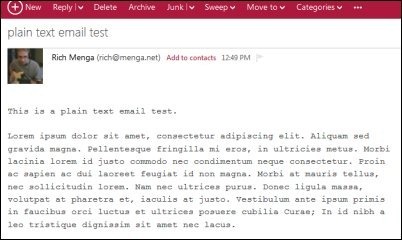 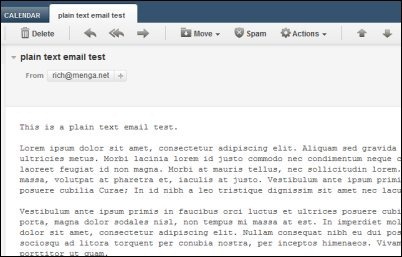 ...or even AOL Mail for that matter:

But Gmail? They just had to be different and not show plain text in a monospaced font unless you install a Chrome extension just to do it. How come Gmail doesn't show plain text properly on its own? No idea. Ask the Gmail team; maybe they can give you an answer.

The newsletter I send out every Sunday is composed of nothing but plain text, and I intend to keep it that way.

Why do I have such a penchant for plain text?

That's a good question and I have a very good answer.

Imagine for a moment if people had the ability to stylize cell phone text messages. You know that one of your dopey friends or family members would send you a message like this:

Yes, someone at some point would send you a message in huge, bold, disgusting Comic Sans in yellow that you can barely read because it's on a white background; this would happen; make no mistake about it.

And if you complained to the dopey person who sent you a message styled like that, the reply you would get is something like, "lol i dont know how 2 change it". Yep, we're talking about a broken message system at that point. Too easy to screw up and too lazy to fix.

All of that would happen, and it would be a nightmare to deal with.

Or worse yet, some dope would add in a disgustingly huge signature along with a "warning" at the tail for a message less than 20 characters long, like this:

Yes, it would get that bad, so believe me, it's a blessing that people cannot style their text with SMS messaging.

To me, newsletters with formatted crap in them are just as bad as web pages full of ads or those dopey emails people send with stupid big-ass worthless signatures.

I did not want my newsletter to look like every other newsletter out there. I author a few of them besides my own, and believe me, if I had my way I would compose them exclusively in nothing but plain text. No formatting, no graphics, no crapola whatsoever. Just text.

5 good reasons why plain text for a newsletter is better

Nobody wants to receive a newsletter that looks like an advertisement, period.

There is no way to hide pop-up ads or other nasty scripting crap in plain text since it can't execute anything, so by nature people feel more safe reading it.

Anyone who puts anything animated in an email newsletter (and there are some who do that) should be smacked. Plain text never moves on its own. The only time it ever does is when you scroll and that's it.

4. "Looking computery" is not a sin

Monospaced typewriter-style text doesn't offend anyone and never did. And I'm pretty sure most of the time people welcome seeing plain over formatted text.

5. Loads lightning quick and no "permission" needed to view on first read

Concerning file size, text is the smallest and loads faster than anything else. For many, this is a joy - especially for those with slow internet connections.

Contrary to popular belief, there are still a lot of people out there with really, really slow internet connections. For them, getting a plain text newsletter is a happy time because they know 100% it will work on the first try when they go to open it.

There's also none of that "give permission to view images" crap when you view plain text in email because, well, there are no images. Because of this, plain text is the absolute easiest type of email to load up and read.

At the end of it all, blogs are fine for images and formatting and so on. But as for email, no. Email should be a plain-text-only world, just like text messaging. I do my part to keep email plain-text-only by only sending out text-only newsletters.