"How to be an Econorocker" is here! 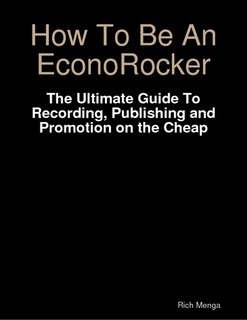 The book is finished and you can check it out right now, see my books page.

So what's in the book?

Well, it's not just a rehashing of the stuff I've written on this blog before. I've seen a lot of bloggers do that and it's crappy every time that happens, so I specifically put stuff in the book that is not on this blog.

What I decided to do is basically split the book into two major subject areas, that being recording for cheap and promoting for cheap; the two are totally separate from each other and it's important to know how each works.

Getting your recordings done cheap is not hard, even if you're just a beginner guitar player. As long as you can keep your guitar in tune, believe me, you can record great stuff as long as you have the right cheap gear to put it all together.

Promo on the other hand is something 99% of bands and artists get totally wrong, and wrong often. I'd even hazard to say that the how-to-promo info in the book is actually more valuable than the how-to-record info is.

I can't tell you how many bands and artists I've seen that are permanently stuck-in-the-1990s who fail over and over again at promo. And the sad part is that's not limited to just older bands, because teens are making the same mistakes their fathers did.

A classic example of failure that bands still do is that idea that "touring means everything" and "merch (as in merchandise) means everything." Nope. Wrong. Every single crappy band has crappy merch that nobody buys other than the wives and girlfriends of the band and nobody else.

Another classic example of failure is playing in bars in an attempt to become The Next Big Thing. Well, drunks between the ages of 30 and 65 (those are who frequent bars most) aren't interested in your crappy CDs nor your crappy merch; all they care about is hearing stale old hits from the 80s, 90s and nothing else.

In the book I do explain how to avoid all those costly MISTAKES, and concentrate more on getting your music/band popular for cheap. And of course you learn how to record with cheap gear as well.

Get the book. You'll be glad you did.