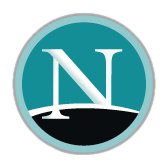 Although I blogged about this elsewhere concerning the tech aspects of Netscape 9, I'll tell you the reasons why I switched to this browser (and yes I fully switched over.)

First, it uses the Firefox engine yet runs faster and lighter than Firefox. Don't ask me why; it just does. The memory footprint is noticeably smaller even with add-ons installed.

Second, it runs everything Firefox does. All the plugins, all the themes and so on.

Third, it imported everything from my Firefox install easily.

The fourth reason is the one I like the best: It's a huge nostalgia trip.

The first web browser I ever used was Netscape 2.02 a looooooong time ago. This was back at a time when everyone used Netscape. Internet Explorer, while there, just didn't work as well as good ol' Netscape did. I used this browser up until version 4.08, then used Internet Explorer for a long time, then to Firebird, then Firefox.

Going back to Netscape for some reason just feels right. I seriously dig seeing the "N" throbber graphic at the top right and the very familiar green/black color scheme looks great.

Firebird (which became Firefox) was originally a fork of the Netscape Navigator browser itself. So for all intents and purposes, Firefox is what Netscape would have become. And it's ultra-cool that Netscape uses the Firefox engine. The whole thing just makes sense.

As computer-geeky as this sounds, browsing the internet with Netscape Navigator is the way things should be. Like I said, it just feels right.