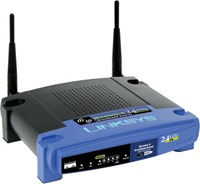 I returned the Linksys WRT120N and I'll explain why in a moment.

A few minutes before I wrote this I bought a Linksys WRT54GL (pictured) via Newegg. 60 bucks, free shipping. It will arrive probably by Wednesday or Thursday. For now I'm using my old D-Link DGL-4300. It has crappy Wireless G, but it will do the job until my Linksys arrives.

The quick story about the D-Link DGL-4300

I bought that router years ago because I thought it was the best available considering how expensive it was. If I remember correctly, it cost me somewhere in the neighborhood of $160 or $175. However as I found out - and is a well-documented fact - it drops wi-fi connectivity for basically no reason. As a wired router, it's fantastic. For wireless, it sucks. I refuse to part with it because it makes for a good backup (which is how I'm using it right now) and the fact I spent so much frickin' money on the thing to begin with.

Why I returned the Linksys WRT120N

The WRT120N does not deliver true Wireless N as it has a maximum data rate of only 150Mbps (true wi-fi N is 300Mbps). In other words, it's just barely better concerning speed than a wi-fi G. I tested a connection at N and wasn't impressed with it at all. Yes, I was connected at a faster data rate, but I didn't notice any real difference compared to G.

When sitting there idling, the top of the chassis gets warm. Not hot, but warm. The fact it does that means that during heavy data transfer it most likely will get hot and result in a short lifespan over time. Linksys should have made the chassis with a higher profile.

It is for this reason I did not purchase a Linksys WRT54G2. When you look at it, you'll say, "Um.. that looks identical to the 120N". All newer Linksys routers to the best of my knowledge share the spaceship-style design, which I think sucks because if the 120N gets warm, so will any other that has this style of chassis.

Why I purchased a Linksys WRT54GL

For those of you that know Linksys routers, a question you may ask is why I didn't purchase a WRT54G instead of the WRT54GL. The answer is simple - NewEgg doesn't carry it longer. If they did, I would have went for the 54G and not the 54GL to save a few bucks. The only advantage to having a 54GL is that DD-WRT allows you to do a bit more with it compared to the 54G, however I have no intention of using DD-WRT because all I was concerned with is getting a solid reliable wi-fi G router.

The WRT54GL has the old-school chassis (pictured above) with a much higher profile. As such it dissipates heat a lot easier - and for me that's absolutely required. After my experience with the WRT120N's warm-for-no-reason chassis, I'm duly convinced the new design sucks no matter the model.

Yes, I could have purchased a refurb 54G from Amazon, but I wanted new. Certain things I'm okay with buying refurb, but not network equipment.

Years ago I bought a WRT54G. I gave it to my father so he could use it as his house. It still works and might in fact be literally 8 years old (the 54G was originally released in 2002). If that doesn't say "reliable", I don't know what does.

What about N and the future of N?

Wi-fi N is a waste of time for me and most other people. The only ones who truly care about it are gamers wanting to connect their Sony PlayStation 3's wirelessly using that spec for the speed. Otherwise, few give a crap about it.

My netbook has a Draft N card in it, but as long as I can connect on G I'm good. And it's not as if I'm using the netbook for anything that requires me to download huge files.

Also, my Nintendo Wii doesn't support N. The max it will do is G. If I had a PS3, then maybe I'd give N more consideration, but I have no intention of buying that console so it's not even worth the bother.

Concerning the future of N, at this point it's all screwed up. The way wi-fi router speeds are measured is by Mbps, and the three major "up to" speeds are:

If you're budget-minded and don't game over wi-fi, use G. If you want wi-fi speed for gaming, use Full-N.

The one to avoid is Half-N like the WRT120N I just returned because it serves you no advantage at all. All you get is slightly faster data rates with a router that is not fully N spec'd. You're getting cheated because you'll never be able to achieve the full data rate capability of your Draft N wi-fi card.

Companies should really, really label 150Mbps in a more human-friendly way. If it's not the full spec, it should state so right on the box in plain English, like "N1" being 150Mbps and "N2" being the full 300.

Hopefully in the next few years all of the 150Mbps wi-fi routers will be completely taken off the shelves - but as long as they exist, it gives people pretty good reason not to go N. Heck, it convinced me to ditch it for G.

Then comes the argument of how much bandwidth does one really need on wi-fi. For the vast majority of stuff people do on the Internet, G will handle it all with relatively little wait time. The only thing I can think of besides gaming that G cannot do is stream 1080p-quality YouTube videos and that's it. Everything else is a-okay with G.

Here's a kicker for you: If we didn't view video online, most of us would be content with wi-fi B. The B spec may only be a raw 11Mbps with an average practical rate of 4 to 5Mbps, but when you take video out of the mix, you'll notice the load time really isn't too long of a wait as long as you have a strong signal. I think this is part of the reason all new wi-fi routers still have B as an option.

Anyway.. my WRT54GL will be arriving in the mail in a few days.

Assuming it's built with the same quality WRT54G series always has had and barring any unforeseen circumstance (such as the router getting fried from lightning), I shouldn't have to buy another wi-fi router for at least a good 5 years.

Chender Yngwie Malmsteen Stratocaster
This is absolutely the cheapest way to get a scalloped fretboard Strat.

The second best wristwatch in the world
This is what's on my wrist when I'm not wearing the F-91W or A158.