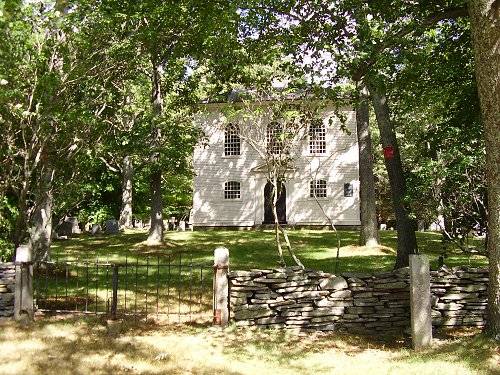 Someone was nice enough to e-mail me and say how nice my photography was (something I truly appreciated) so I dug through my archives and found this one. This was one taken of a place called "Old Trinity". It's in Northeastern Connecticut; I can't remember what town it's in. It used to be a church, I think. The place is surrounded by legends and urban myths. I've heard every single kind of story you could hear about this place, including but not limited to:

"Someone was killed here."

"When the trees show the shadows just right you can see an image of a cross, and where the cross intersects is the exact spot where someone was killed."

"Cars stall for no reason passing by this place at night."

All the heavy metal goat throwing musicians of the day used to spin tall tales about this place. I never believed any of it. It's an old building made "famous" by locals trying to make it into something it's not.

What no one has ever said about this place (but I will) is that it looks quite nice in the afternoon. The stonework on the wall is still in good shape (at least at the time of the photo circa summer 2005) and it looks very nice and peaceful.

* I made that up. No one ever met Wayne Newton here.