Tomorrow is the 4th of July. Gonna be honest here, the day never really meant that much to me. In fact the aura of what it's supposed to represent is tainted in my mind because one year I was forced to work that day. That I will never forget. Everyone else got to stay home. I worked. It was time-and-a-half that wasn't worth it at all.

My late father was patriotic. Periodically he would don red, white and blue apparel. He had shirts with the stars and stripes, a few ties with it, some baseball caps with the same look, and so on. As he put it, he was a "flag waver". I am definitely not.

Here's something where I'm absolutely sure other people share the same sentiment: Any time I see anyone wearing the stars and stripes in public, I steer clear of that person. The only person that I didn't avoid who wore the flag was my own dad for obvious reasons.

When I see people wearing the flag, I get nervous because it's almost always true they have an opinion, and I don't wanna hear it. The fact I just said people who wear the flag make me nervous would probably get one of those flag-wearers to start bitching at me. "WHADYA MEAN IT MAKES YOU 'NERVOUS'? EFF YOU!" Okay, fine, eff me, whatever. Go share your opinion with someone else. Anyone but me. Really. Off with you. Goooooooo awaaaaaaaaay seriouslygetoutofmyfacethankyoubuhbye.

This is the only time someone wearing the flag is acceptable: 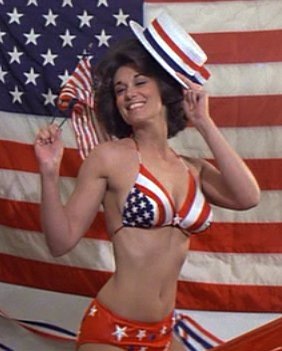 If it's a thin chick with a big rack, cute butt and a great smile, cool. She can wear the flag. Stars on one boob, stripes on the other. God bless America.

Anyway, I see the 4th as one of Pop's holidays being it's a patriotic day and all that. It's been a month and 12 days since he passed away. Seems like it's been longer, but it hasn't.

Off and on I've been having weird (as if there's another kind) nightmares which indirectly include my father. I say indirect because he's almost never there, but I can hear him in the distance or somehow feel his presence nearby. In the dream, that is.

The latest weird nightmare, which has been somewhat of a recurrent theme, is that I'm walking, with a bicycle, outside in almost pitch black night - and it's cold out. Not freezing, but cold. And I am wearing a coat. I'm staring down at the bicycle as I'm walking with it slowly and periodically take a glance up - but not often because I'm spooked a bit because I'm walking around in the middle of the night, alone. Where I was walking was up the long driveway to the house I used to live in. My dad is in the house - that I know - and I know it will take me a while to get there. The dream ended when I realized, "Hey wait, I'm in a drea--", and I wake up.

I know why I'm walking with the bike - I can't ride it up that steep driveway, so I have to walk it. What I'm wondering is why I have the bike in the first place. It's a mystery. Oh, well.

My plans for tomorrow don't involve too much of anything. Just another day on the calendar.