There are some (and you know who you are) that think I'm a bit of a fuddy-duddy because in many instances I will champion older tech over new. Maybe you think I pine for the days of olde when times were simpler. Wrong. I prefer older tech in some instances because it simply works better and lasts longer.

Before getting into the old stuff, there is new stuff I do sincerely appreciate. I would never go back to CRT computer monitor, ball mouse, rotary phone or yesteryear microwave. Some newer stuff does make our lives easier. However there's quite a few items from the old days that are still the best you can use. Here's a few examples. 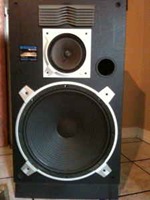 Using speakers of this type was the de facto setup for around 30 years. What killed the tower was the introduced of what I call the separated setup. Instead of having 3 or 4-way standard towers with an optional pair of surround speakers, this was replaced by skinny boxes with no bass speakers, mids and tweeters up high and a subwoofer on the floor.

There are those who say the newer separated way of doing it sounds much better. Wrong. What happens with a separated setup is that the natural combination of low, mid and high was now separated into something digitized. While it may sound crisp and clear, the sound is completely flat. The reason? You traded your tower boxes that could move real air for something that can't move anything.

Old-style 3 or 4-way cabinets produce what I call a "round sound". It is a warm rich tone that skinny separated boxes simply cannot reproduce because they can't move air. If you want the real round sound, tower cabinets are required. A subwoofer won't save you because all that does is shake the floor badly and sounds like a log just pulled out of a swamp. 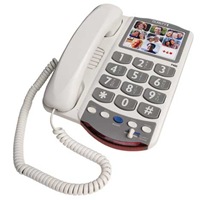 Every person should have one of these on their nightstand. It never needs batteries. It will work even when the power is out. It's easy to dial just by feel alone (you can dial without even looking at it). The ringtones on phones like these are warmer sounding because of the larger chassis. The handset is easy to lean on if you want to lie back in bed while talking to someone. The handset also sounds better because it has a larger speaker in it. And there is no possible way to lose the handset because it's always attached.

If you have a landline, get one of these. They still sell them new even though it's an older technology. You'll be very happy you did when the moment comes that you can't find your cell or cordless phone handset, because you know the one on your nightstand will always be there and ready to use. Pick up, dial and be happy. 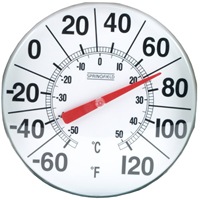 There have been many instances where companies try to sell you digital outdoor thermometers that require a battery-powered outdoor sensor that transmits every minute or so to the indoor unit. This is convenient, but does not beat the convenience of a well-placed large outdoor thermometer considering it never needs batteries because it doesn't require them.

What I mean by "well-placed" is to have it mounted somewhere where it's easily viewed from almost anywhere in the house. If you're really smart about it, you'll set up a network of strategically placed small mirrors to bounce the image to other parts of the house where it can't be readily seen.

There are those that would argue it's just as easy to find out how hot or cold it is just by looking online or using a smartphone app. The problem I immediately point out with that is that it's not accurate and can be off by as much as 5 degrees in either direction - and that is the difference between wearing a coat or not for a lot of people. You need to know the temperature as it is at your house, meaning not at the airport and not some random PWS 15 to 20 miles away.

Once you go with the big red needle, you never go back. It's literally a set-it-and-forget-it thing. The only time is breaks is if some wild storm comes back and knocks it off its mount. Other than that it's 99% maintenance-free. The only thing you have to do for upkeep is clean off the lens once a year, which takes all of about one minute. 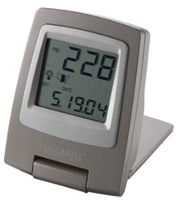 I own one of these. Do I travel with it? Nope. I have it mounted with double-sided Velcro on the bottom right of my bathroom mirror. It's the perfect size for a bathroom clock, sets itself so I never need to reset it and runs on a single AA battery that only needs replacement once every two years.

The reason the travel atomic clock is perfect for the bathroom is not only because of its small size, but it also tells you something other clocks don't - the date. When you're in the bathroom washing your face, shaving or whatever and are still knocking the cobwebs out of your head from just waking up and forget what the hell day it is, the clock will tell you.

Travel atomic clocks are the only kind of clock of its size that actually states the date.

I've had mine for somewhere in the neighborhood of 5 to 7 years. Still runs perfect, and thankfully they're still for sale - especially since they're considered retro now.

At one point in the future my home will have nothing but atomic clocks in it, because I hate having to reset clocks every time the power goes out. The microwave clock I can deal with, but as for the others, I'd prefer them to reset themselves.

Yeah, I know, you're probably going to say "Just use clocks with a 9V battery sentinel in them." All well and good, but have you priced out 9V batteries lately? If you haven't, prepare for some sticker shock. Replacing the clocks all with atomic ones pays for themselves in less than two years considering the cost of 9V batteries which you're supposed to replace every six months.

The above are just a few examples I can think of off the top of my head. Believe me, I have plenty more retro items that I intend to find and use. It may take a while to hunt around and find them all, but once found and bought it will be very unlikely that I'll have to buy them ever again - or at least not for at least a good 10 to 20 years.

And yes I am saying that we should expect our tech to last at least a decade. That whole planned obsolescence thing is enough to drive anyone to drink, so I purposely avoid tech products I believe are designed that way.