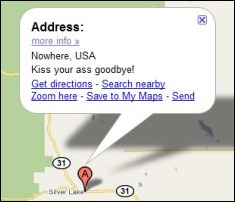 Some real geniuses that blindly followed what their GPS told them got stuck and almost died in Oregon with 18 inches of snow on the ground, but fortunately didn't.

Anybody who knows me knows I champion GPS technology as the best vehicle accessory ever invented, period. But there are those who are so unbelievably stupid when it comes to technology. "Sure, let's follow exactly what this thing says. It wouldn't steer us wrong, would it?"

Oh, give me a break.

There was a super-awesome comment on that linked article above. Here's a piece of it:

[If] the same couple, uses a paper map, to find there current location. They then find, on the map, where they are going. They see the same road connecting them to their designation on the paper map. They choose that road because it is the shortest and quickest route possible.

They still get stuck. In the same spot. Technology cannot cure stupid. If you are stupid enough to go into a remote road, in the middle of winter, regardless of what map/navigation you use, and get stuck in 18 inches of snow, for no other reason but it was there, maybe you should not be driving.

Couldn't have said it better myself.

How were they saved from being stuck? GPS. The cell phone was equipped with it and got enough of a signal out where they were able to be rescued.

I'll quote one more little blurb from the commenter above:

A major road is not one that is covered in 18 inches of snow, in the middle of nowhere, with no one in sight. If you do not have a semi passing you at 70 mph then you are not on a major road.

Again, couldn't have said it better myself.