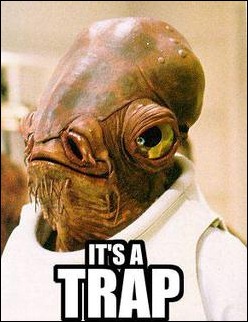 I've debated switching off a self-hosted blog and going with a service-hosted one for a while now. Ultimately I don't because if you don't self-host, you get caught in a trap. Or several.

Here's an example of a classic trap even though it's not a blog: Flickr. The trap there is that after your 200th photo posted there, you can't get to it unless you know the actual HTML from bookmarking it previously. And who does that? Nobody. So you're forced to pay just to get to the stuff you posted before, and that's the trap.

Tumblr is good because they allow you to download backups of your blog - for free. Their trap is that they charge ridiculous amounts of money (as in $49 per template) just to customize the thing beyond really basic stuff. And if you want to attach a domain to Tumblr, they only allow you to do it via DNS A records. Stupid.

Xanga as "uncool" as it may be to some is actually really good. Their trap however is that you have zero access to downloadable archives unless you pay for a premium membership. Granted, it's cheap at only $25 a year, but still, it is a trap. Oh, and if you want to search your own private blog, yeah, premium membership is required for that too.

The service-hosted WordPress nickel-and-dimes you to death. If you add up everything you'd need that you get by simply hosting it yourself, it's just shy of $155 a year and that's the trap. Some people that wouldn't know any better would probably think that's a great deal, and I suppose it is to those who don't know anything about programming, manually configuring MySQL databases and whatnot. But if you actually took the time to learn the behind-the-scenes stuff, you can do everything for under $100 a year easily.

Self-hosted WordPress, which is what I do, is cool and all that, but it has its own nasty set of traps. At some point your database will need to be started over from scratch. This is the equivalent of reinstalling Windows to get a fresh-and-fast OS. When you do that with a MySQL db, the same result happens. Any slowness that you had is magically cleared up, but there's nothing magic about it since all you did was eliminate all the useless crap the db picked up over the years.

What anyone who authors a blog wants whether they realize it or not (but eventually will) is that they'd really like to have all their posts as local editable documents. I'm talking about Microsoft Word or LibreOffice Writer documents. Files you can simply double-click, open up and do with what you will.

There is no option to do this with any blog platform.

If you want your blog posts as local documents, you have to either have the original or manually copy and paste the frickin' thing in there. Yeah, I'm not kidding.

What I'm eventually going to have to do it the manual-paste thing for every blog post I have. It will be a long, tedious, stupid process.

You're probably asking "Why bother?" Good question, and I have a good answer. If you don't do it, you run the risk of losing all your blog content forever with no way of ever getting it back. All the effort you put into it is gone.

For example, there are a ton of people out there who have MySpace blogs that span years. Many authors posted every day for a really long time, and I wouldn't be surprised if some still do. How are they going to export their blog? They can't. All the content is literally trapped within the MySpace system.

What about the newer Facebook Notes? Can you export that without doing the manual copy/paste thing? Probably not, although I haven't checked but I'm pretty sure there's no option.

At some point I will have to manually copy/paste each blog post I have into LibreOffice Writer - and bear in mind I have close to 2,500 posts. Many of them aren't simple copy/pastes either because of image and/or video content.

I also really have to get in the habit of composing all new blog posts in LibreOffice first, then posting to WordPress so I don't have to go back and backup the stupid thing.

It all just sucks.. ugh. But I gotta do it. Eventually. 🙂