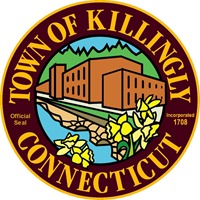 I live in Tampa, Florida now, but where I come from is the antithesis of Tampa, that being the stomping grounds.

The term "stomping grounds" is a reference to where you grew up. In my case, that place is Killingly. It's a tiny town inside the tiny US state of Connecticut. Were to to drive through that town, you'd probably say, "This place really looks nice. It sure must be nice to live here." Yes, I will admit, it's pretty. But really, really remote.

The Town of Killingly is in Windham County. The municipalities there are broken down into borough and villages. I say borough because there's only one, that being Danielson. The rest are Attawaugan, Ballouville, Dayville, East Killingly, Rogers and South Killingly; these are all villages.

Windham County is located at the northeastern tip of Connecticut and is known by its nickname, "The Quiet Corner". Its titled as such because absolutely nobody outside of the region knows it exists; not even the evening TV news stations report weather for the area. Chances are if you've never been there, you didn't know it existed either. Townies often call the area "The Forgotten Corner".

The best time to pass through the region is in October during "peak foliage" of the Autumn season, because said honestly it's like living right inside a piece of art. I have pictures of this here.

Killingly is also the epitome of New England small town living. You don't get much more in the way of quaint, cozy or whatever other "cute small town" descriptor you want to throw in there to describe the experience of living there. But that's only the surface.

When you examine beneath the surface, you'll find problems.

Located in the poorest county of a wealthy state

Make no mistake, Connecticut has cash and lots of it. Hartford is known as "Insurance Capital of the World" because there are so many HUGE insurance company buildings there (several with their own parking garages on the property that they own 100%). CT the last I knew also has the largest casino in the world, Foxwoods and another large casino, Mohegan Sun. You'd never guess CT is a wealthy state by driving through Killingly however, as evidenced by the fact that over 8% of the population in Windham County is below the poverty line.

Why is it so poor? It's probably due to the reason there is no major east/west connector to where all the important stuff happens. See next section.

Unless you've lived in Windham County, you have absolutely no idea how much of an impact in the negative direction the lack of a major east/west road is.

Here's what was supposed to happen (Image credit: Kurimi):

The gray route shown above was supposed to connect Windham County to the rest of Connecticut. It never happened. This was one of the worst decisions ever made because it completely cut off Windham County from the rest of the state, further driving it into poverty which it still suffers from to this day.

If you want to get from Killingly to Hartford, check this out:

A is Killingly, B is Hartford.

You have to take so many small roads to get there it's just plain ridiculous. This is a long, annoying and tedious drive. The really sad part is this is your best and fastest route.

Any time you have to go westbound, you're screwed.

Most locals don't even bother going westbound into the state for this very reason unless they absolutely have to.

Killingly is a mill town (as are the rest of them in Windham County), so obviously the jobs that are most available are in mills. Whether it's picking, packing, assembly, machine operating, manufacturing or whatever it is, it's all the same. Heck, a picture of a mill is smack dab in the center of the town seal. No matter what you call these places, be it manufacturing centers, assembly plants or otherwise, a mill is a mill. If you work in one, you have a mill job, period.

There is no opportunity for career advancement in Killingly or anywhere in Windham County. The best you could possibly hope for is a supervisor position in a mill. And nobody wants that. Ask anybody there who works in a mill and the response is always the same:

"Sure, the check is better but I don't want to deal with the politics of being in charge."

If you don't work in a mill, there's sales, the food service industry and not much else. Even if a townie wants something better and more fulfilling for a job, it simply isn't there.

Everything is far away

In addition to being cut off from the lack of a major east/west connector, anything worth going to isn't local.

There is a local Wal-Mart in Putnam (a neighboring town), but it's tiny and it sucks. If you want a Wal-Mart Supercenter, the closest one is almost 20 miles away.

The closest true shopping malls are the East Brook Mall (Connecticut), Auburn Mall (Massachusetts) and the Warwick Mall (Rhode Island). All of them are over 25 miles away.

When in Windham County, you're living in a bubble, and not the good kind.

What would I have done if I'd stayed?

If I hadn't moved to Florida, would I still be in Killingly? Not a chance.

If still in Connecticut, I'd either be in New Haven or Fairfield County. If that didn't work, I'd be in Tolland County. Granted, it would be cool to be near the coastline, but that costs too much. I would want to be as close to an interstate as possible, either I-84 or I-95. Why? Accessibility. Better jobs, more money, better life. Without the accessibility, life just sucks because you can't get anywhere. Not easily, anyway.

If Massachusetts, I'd be somewhere in Middlesex County or Norfolk County. Norfolk in particular has good living.

If Rhode Island, I'd probably be somewhere around Cranston or Warwick.

What do I think about the stomping grounds now?

Killingly's biggest to-do since my departure was the opening of the Killingly Commons. The town was extremely excited to finally have a modern shopping area. This happened in 2008.

Here's a video slideshow of it:

(Note: No audio in the video above. I removed it because the original author used music that didn't belong to them.)

I get nothing more than a sinking feeling when watching the above. The message sent to me is, "Here was our best try.. too bad it didn't work."

Why is that the message I hear? Because even though everything looks happy and lovely above, the area is still deeply impoverished and is showing absolutely no signs of recovery at the time I write this.

An article from May 2009 pretty much says it all. People are losing their houses left and right. The area is in deep, deep fiscal trouble. Much worse than people thought.

I got out at the right time. No question. The place is just in bad, bad fiscal shape. It's not pretty. They may recover someday, but I don't see that happening for a good long time.

Do I miss anything about the stomping grounds?

The only thing I really truly miss is the scant six weeks (as in second half of September and all of October) of the year where everything just feels better and everybody is happy. But it is oh-so short. Too short. The other forty-six weeks of the year are just plain crap compared to those six.

Other than that, not much else unfortunately.

Even though that's the case, I do plan on making a visit one of these years. And of course it will be during those six weeks so I can get the best experience.

Maybe I'll get a Killingly postcard, should one even exist.