the true last of the unearthed emails 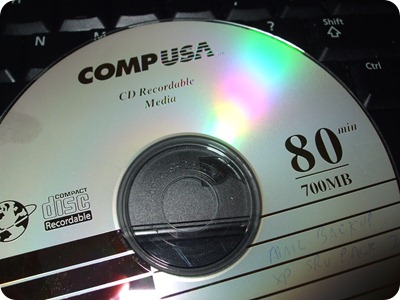 Back in January I thought I'd found the last of emails I'd backed up to CD. Nope, I found more.

At right is a disc I had found at the bottom of a box full of papers I was shredding. Yes, it's a real CompUSA store-brand CD. Written on it are the faint words "MAIL BACKUP" and "XP SRV PACK 2". When I popped in the disc, no XP was present but quite a few emails were which is what I cared about anyway.

So what was on this disc? Email I'd thought I'd lost. A whole bunch from '04, '05 and '06. The '06 stuff particularly interested me because during that time I was using Gmail which COMPLETELY ERASED ALL MY '06 MAIL; this is why I don't use Gmail. But yeah, I definitely recovered stuff that I thought was gone forever, so awesome deal there.

What was even better is that the mail archives were in Thunderbird's MBOX format, so it imported right in with no trouble at all. And wouldn't you know, I actually put the CD in a paper sleeve originally so it was perfect when I found it.