Note: If anyone's reading this through an alternative web site (like Google Reader), the photos show up as "no hotlink" images. To see photos here you need to physically (gasp) come to this web site to see the pics. You also may need to reload the browser just once. Sorry for the annoyance but I save tons of bandwidth by not allowing hotlinkers.

This is an average pic of a bunch of cars in a parking lot. Why is this significant? It's not - at least not right now. In the future it will be. I make a point to take photos of what is considered to be mundane things from time to time just for historical purposes. This one shows what people are driving right now. We've got (from left to right) a Chevy full size pickup, Ford Escort, something I don't recognize, Chevy Cavalier, Jeep Grand Cherokee, Toyota Tundra, Pontiac Sunfire, Subaru Outback, Ford Escape and Toyota Tercel.

Will cars change? Of course they will - that's why I took this photo.

Take photos of your stuff. Your house, your car(s), people, streets and anything else you can think of. Don't wait for a vacation. While most of your photos might be boring now, they'll be memories later. 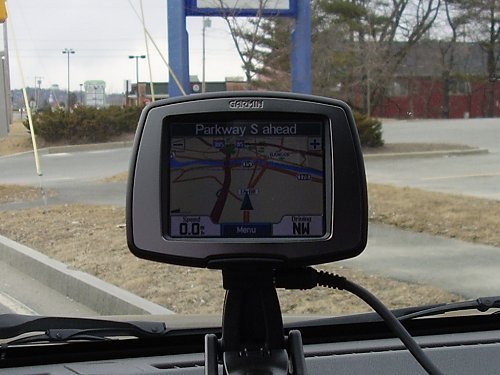 Not much to say except hot damn this thing is so cool. Everyone should have GPS. I took the photo because I didn't have any images of the c340 in action on my site. Note that the MPH is zero point zero - so yes I did take the photo while at a stop. (grin)