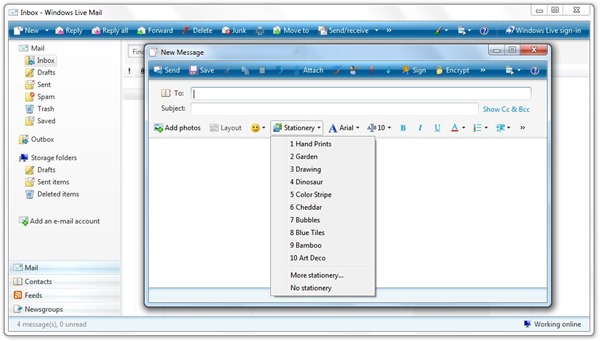 This software is not easy to come by.

Okay. Rewind the clock back to when Windows Vista was brand new. In that Windows OS, the bundled mail client was called Windows Mail, which was nothing more than a modernized Microsoft Outlook Express. This had to be done because Outlook Express 6 requires Internet Explorer 6 in order to render HTML emails (and this is why OE6 will not work in Vista or any Windows after that).

In 2008, Microsoft releases Windows Live products, and one of the products in the suite is Windows Live Mail, which is "Build 12, version 2008." This client is basically a copy of the same mail client in Windows Vista.

WL Mail 2008 was very colorful, had stationary options, and while a tad on the buggy side worked well for the most part.

This mail client did not last long, because the next year Microsoft released "version 2009" of the Windows Live Essentials suite. It is the last suite Windows XP supports.

Version 2009 ticked off a lot of people because several features from 2008 were removed. Even though a calendar was introduced, Stationary was gone and color customization almost removed completely (it has a few customization options but not much). Everything that made the 2008 client cool was just gone in 2009...

...and there was no way you could get it back unless you specifically knew how to get the 2008 version.

Well, I have it. I have the original MSI installer file.

I think what I have is a "Wave 3" version if I remember correctly? I also remember that acquiring this installer was not easy. It originally required installing the full 2008 suite and then digging into a directory to find the actual installer, then saving a copy of it.

This will run in Windows 7, and even run alongside other newer Windows Live programs since it's a standalone. As for Windows 8, I've no idea because I've never used Win8.

It's actually kinda funny, because Vista is now a "retro" operating system, and Windows Live Mail 2008 totally captures the Vista look. It's also not the last free mail client Microsoft released that will work in XP but rather second-to-last. And in my opinion, best.

For WinXP in particular, there are two mail clients that run amazingly well in it. The first is the 2008 version of Windows Live Mail, and the second is Mozilla Thunderbird 3.1.20 (still available for download on Mozilla's web site.) Version 3.1 in XP runs great. 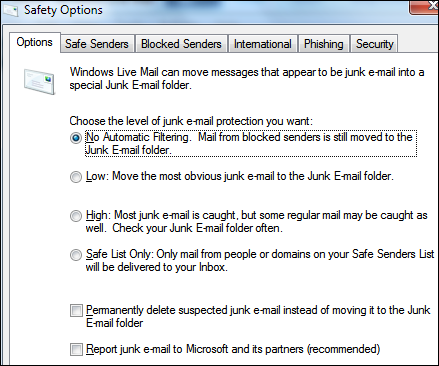 You'll notice from the other tabs that is has safe/blocked senders and phishing control. As for how well phishing control works, that I don't know. But again, it's nice that it's there.

While the menu structure is different, WL Mail 2008 is basically what Outlook Express 7 would have been. So if you have an old XP machine clunking around, I personally believe that as far as free mail clients from Microsoft are concerned, WL Mail 2008 is the best to use. Otherwise, use Thunderbird 3.1.20 (which also has good spam controls).