windows xp lives on with posready 2009, but the pc is still dead

I just learned recently that Windows XP will in fact continue to be supported until 2019 - if running a certain edition of it.

In April of this year 2014, Microsoft will be discontinuing security updates for Windows XP. But there is an edition of it that will be supported all the way until April of 2019, and it's called Windows Embedded POSReady 2009. The POS means point-of-service or point-of-sale.

POSReady 2009 is basically nothing more than a slimmed down Windows XP. The user experience is exactly the same, except you're missing certain things like Outlook Express and MSN. In other words, an XP "Lite" of sorts meant for business use.

While true XP will live on with POSReady, most people dumped XP years ago for Win7, Win8 or switched over to using a smartphone full time.

On this site, XP only accounts for roughly 6% of all the web traffic that shows up here. The top two OS types that visit here are Win7 followed by mobile. On the mobile side I see a lot of iOS and Android, which means iPhone, iPod Touch, Samsung Galaxy and stuff like that.

Does 2014 finally spell out the death of the PC?

Win8 did not go over well with the masses. Not at all. It's done so poorly that Dell has started promoting the fact they still have Win7 PCs: 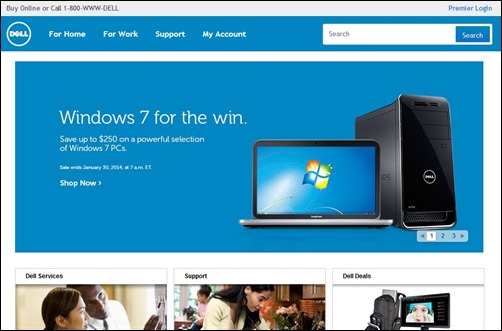 I took that screen shot from Dell's web site today in January 2014.

Dell doesn't even mention Windows 8 at all anywhere on their home page. Yeah, it's that bad in Windows land.

What makes the PC a dead duck however is this:

Smartphones at this point are getting affordable enough to where most people can use the phone and nothing else to get all their online stuff done.

You can now get an Android-powered phone that will work with Tracfone, and it's well under $100. Yes, it's here. There's even a Samsung Galaxy model for Tracfone now, also under $100.

The under-$100 price point has been reached for phones that are Android-powered that will work with low-cost prepaid wireless carrier service.

Why haven't I gone all-in with mobile?

There are several reasons why I haven't, but the big one is that I can't justify the cost of it.

Because I am very anti-contract when it comes to wireless plans, I'd have to use MetroPCS. That's fine, but it also means I'd have to buy a proper unlocked smartphone. It would be a Samsung Galaxy, and that currently runs for $350 for the III and $500 for the 4 - which doesn't include tax, by the way.

I would have to buy an upper-end smartphone just to be able to do roughly the same I get done on my ThinkPad now. But even if I did that, I lose money every month by going 100% mobile and dropping cable.

Eventually, going 100% mobile will be the cheaper option. But currently it isn't.

At the end of the day it's all about cost, and desktop over mobile computing is still the most cost-effective option.

When will mobile be cheaper? It won't be long. Given the fact that mobile handsets dive down in price so fast, an unlocked Galaxy S 4 that sells for over $500 now will be around $100 by 2017. And with any luck, there will be an unlimited mobile wireless plan that works in my area for $55 a month.

Given the way the US economy is and the projections it will only get worse, unlimited plans are going to have to drop in price. Mobile has to get cheaper in order to survive, or nobody is going to bother buying it and stick with cheap-ass Tracfone models like the S425G I have now...