these aren't the droids we're looking for 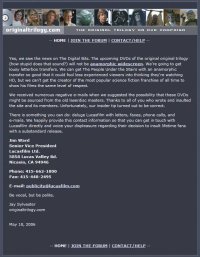 OriginalTrilogy.com finally got their wish - a release of the Star Wars orignal theatrical "unmodified release" on DVD. However, they're still complaining about it. There's just no pleasing some people.

On a completely unrelated note, so far I'm happy to have my comments back. Kat registered which was cool (first user! woo-hoo!). My site is slowly (and cautiously) getting back to the way it used to be. I knew that at some point in the future I would put things back the way they were.. and it's getting there. (grin)

Some girl messaged me from a tiny personals ad I put on craigslist. Evidently she's in one of those hey-zeus groups and one of the first things out of her mouth (it was instant messaging, visualize people.. visualize) is "have you found a church yet?"

What am I supposed to say. "No, but I'd LOVE to be in one of your little brainwashing hey-zeus groups. Yes, sir! After luring me into your CULT, convince me to give me all my money to your church by tricking me into thinking that money doesn't matter - but the church does."

Hmm, how can I reply to that politely? Don't think I can, so my response is HELL NO.

This is the second time in less than two weeks I've been approached by some hey-zeus'ified person. The first one was handing out pamphlets. The one I just encountered pretends to be single wanting to date guys and then lures them into the hey-zeus group.

For some reason I woke up WAY too early on a Sunday, but it served to my advantage. I ran over to the Wal-Mart SuperCenter to do all my foodstuffs shopping, and it was the easiest time I've had shopping in one of those since I've been in Tampa. The aisles were clear, the register lines were more or less non-existent and I was in'n'out of there in record time. Score. Score again because the traffic on the roads getting there was also non-existent.

I have been drinking mad amounts of Hawaiian Punch and I've almost stopped drinking fizzy soda altogether. My newest favorite drink in the world is Hawaiian Punch Mango Passionfruit Squeeze. Yes, I like a drink that has five words in its title.

Perk of living in a major metro: You have your own metro listing on craigslist. In this case, tampa.craigslist.org. I like it. Lots of cool stuff in there.