I've been doing a ton of video editing on my laptop. Problem is that it really was never designed to do that, so it "thinks too much" causing the heat fan to spin up every so often. That being the case, I've been wanting to get another computer with some more power to it with better video memory and so on.

My solution to both problems came to me whilst talking to Pop on the phone the other night.

I have a "big box" computer (standard ATX case) sitting in my closet that I haven't used in over a year. It's a 1.9GHz AMD Athlon XP processor, 512MB RAM and I have two hard drives for it. It's got a DVD burner, CD-ROM drive and a premium 256MB video card in it. In all seriousness, it's a decent box and it will run circles around my laptop in every respect except wireless.

I found that a relatively decent TV Tuner card (with remote) is twenty bucks. I could add this easily to the big box, allowing it to show television.

A 20.1" monitor is $259.99. This could serve as both as my television, DVD player and computer monitor at the same time.

So there's my solution. Put my big box back together, eliminating me the need to buy a new computer. Get a TV Tuner card with remote so I can watch television on it. Get the 20.1" monitor which does tv, DVD and computer duties all at the same time.

Sounds like a plan to me, so I'm a-gonna do it.

And by the way, the price of the 20.1" monitor is the reason why I think LCD tv's are still way too high in price (and why I haven't bought one). If this works out hopefully the way I want it to, I won't even need to get a new television.

my most favorite mug in the known universe 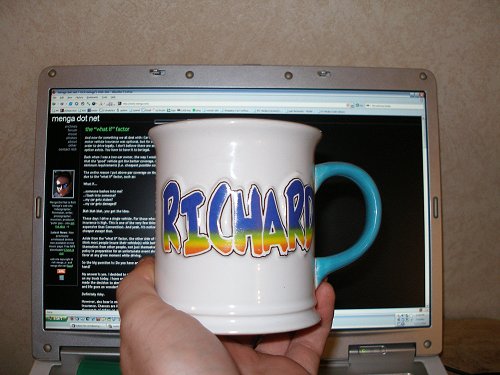 Purchased at a Hallmark store in Putnam Connecticut years ago. I don't remember how long ago, but I do remember it cost me six bucks to get it. You know that it had to impress me quite a bit in order to spend that kind of cash on just a mug. 🙂

I drink coffee out of it regularly.

the "what if" factor

And now for something we all deal with: Car insurance. Used to be having motor vehicle insurance was optional, but for a long time now it's required in order to drive legally. I don't believe there are any states left where the option exists. You have to have it to be legal.

Back when I was a two-car owner, the way I would conduct my insurance was that the "good" vehicle got the better coverage, the other got the state minimum requirements (i.e. cheapest possible coverage).

The entire reason I put above-par coverage on the "good" vehicle is directly due to the "what if" factor, such as:

Blah blah blah, you get the idea.

These days I drive a single vehicle. For those who aren't aware, Florida car insurance is high. This is one of the very few things that is actually more expensive than Connecticut. And yeah, it's noticeable. Everything else is cheaper except that.

Aside from the "what if" factor, the other side of car insurance is karma. I think most people insure their vehicle(s) with better coverage to protect themselves from other people, not just themselves. You pay for a better policy in preparation for an unfortunate event should karma not be in your favor at any given moment while driving.

So the big question is: Do you have enough faith that karma will deal you a fair hand?

My answer is yes. I decided to go with the absolute bare minimum coverage on my truck today. I have enough faith in my driving ability and karma, and made the decision to aim low. It's a risk. It could be that I enjoy the savings and life goes on wonderfully. Or it could be that I wreck and pay the price.

However, also bear in mind that you never get back what you pay for in insurance. Chances are if you're my age (31) or close to it, you've spent many thousands of dollars on auto insurance. And like I said, you'll never see a dime of it.

Then again, you could take the bus, not own a car and not worry about any of this. 🙂 But I like driving too much to do that.