I use a contact form here for people to communicate with me primarily to prevent spambots harvesting my email address, however I do appreciate the fact that the following is true with a form:

Using a form is essentially just like text messaging. There is basically no possible way to screw it up, and that's awesome.

Both Twitter and Facebook use forms for all text communications. Thank God for this, because if people had the ability to attach files, show images and customize the font on those platforms, it would completely wreck the messaging system. I mean, c'mon, you know some dope would throw out a huge 36pt post in bright pink Comic Sans.

Formatted fonts have their place (like in documents and blogs), but not when it comes to messaging. I do sincerely appreciate it when people are forced to use plain text, because it has always been the best way to send electronic messages.

what your email address says about you

When I see things like this, I sometimes wonder what type of image I'm projecting by using a Yahoo! Mail address. Bear in mind I'm in communication with the geeky sort more than others, so they do take notice.

I'm guessing the first reaction is something like, "Oh geez, a Yahoo user..", followed by "Wow, that email address is short." The shortness of my Y! address alone is actually pretty darned geeky because the lack of length alone immediately says I've had that email address a long, long time. And they're right - it's a 13-year-old email address.

The typical stigmas attached to specific emails don't hold much weight with me. I know Linux users who use Hotmail, non-Apple users with me.com addresses, aol.com mail users who don't forward everything under the sun to you, and so on.

I will tell you the addresses I fear the most: ISP email addresses.

Email addresses of this type are usually ridiculously long and have at least two dots in them. For example, the ones for my local ISP are name-here@tampabay.rr.com. AT&T has ones ending in @my.att.net. Sometimes you'll encounter other ISP addresses ending in dot-net, like ispNameHere.net or whatever. A lot of these are seriously old-school craptastic ISPs. If you take the last part of the address and load it in the browser, you're usually treated to some ISP that's barely above mom-and-pop level. The horror.

When I see an ISP email address on an incoming email, I tread carefully because I do encounter the most nonsense with these. One time some guy emailed me from one asking me questions about Buicks, I replied in kind only to have an automated message immediately spit back at me saying something to the effect of, "To prove you are you, click this link so I can add you." Nope, and screw you. Deleted.

It's also common in my experience that those using ISP addresses get really snippy very easily even with no provocation on my part. That's because he or she is an old crusty user using an old crusty computer on an old crusty ISP. All three of those things put together is a bad combo. I know people well older than I but at least they use modern computers with modern ISPs. It's the ones that are old, computer is old and ISP is old that make me say, "Oh, crap. Not another one of these.."

Receiving mails from hotmail.com, yahoo.com, gmail.com, me.com, aol.com and so on don't bother me. But if I see COOLGUY33@some.crappy.isp, that's when I peg you as a noob. 🙂

internetting in the 90s: realplayer 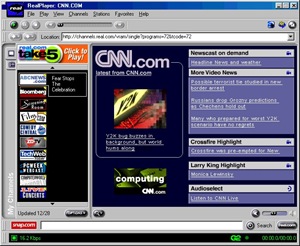 There was a Reddit post recently called One of the worst things ever to come out of the 90's, and it was nothing but a single image of the RealPlayer software. At the time I write this, the conversation is 1,110+ comments strong; it is ridiculous how many people remember that audio/video player from the Windows 95 and Windows 98 days..