The distro I was eyeing that I mentioned in my last post was bandcamp. I've known about that site for a while but wanted to do the big-distro stuff before trying them. While bandcamp is technically an 'indie music' site, in all honestly it's really easy and they do offer high-quality downloads of your stuff in MP3 320, FLAC and so on, so I gave it a go.

Yes, there is the option to load your band domain as your bandcamp page, but I'm not doing that for the simple reason bandcamp profiles have no blog options. Having a blog is important because that's where you announce events and whatnot. What I'll probably do instead is have a very simple home page with two links. One for the blog and the other for the bandcamp site. The blog will probably be Tumblr just because it's easy and is very embed-friendly.

It is true that bandcamp has Songkick integration, but eh.. not good enough, because that's not meant for use a blog. If bandcamp is insistent on not hosting their own artist blogs for fear of blogspam or whatever, that's fine and I can understand that. But there should be something there for true blogging. Something really easy like Facebook Notes or Tumblr integration. Just.. y'know.. something. Maybe that will come in the future for bandcamp, who knows.

Anyway, in my last post I also said I wanted a same-day/real-time way of distro, and bandcamp is definitely it. Seconds after I post a song, it's live and ready to go, and that's exactly what I wanted. True, I don't get the exposure that iTunes and Amazon bring - but - there's no waiting with bandcamp. Very cool. As far as exposure is concerned, I still have Facebook and YouTube for that.

The total number of sales I've made from my album is...

I'm no stranger to digital distro as I've sold product online many times before - but not with big music distros like iTunes and Amazon. I have sold copies of my music, but how many? No clue. When will I know? Might take anywhere from 6 weeks to 90 days before I do. Why so long? Because the big distros usually post reports quarterly in most instances.

I'm not upset about any of this, because the experience is part of the reason I went with the big digital distro providers in the first place. I wanted to learn first hand exactly how it all works, and now I know that even if you are in fact selling, you won't see those figures or collects profits until the reports are complete.

Something that did annoy me about the whole process is how long it all takes. I'm not talking about the actual making of the music but rather the distro process. You go with your distro of choice, pay the fee, and then you're literally in limbo until the distro gets around to processing your order. Sure, the limbo is a few days to a week at most, but the point is that the wait time is an unknown, and I don't like unknowns. You literally have no idea exactly when your stuff will appear in the major distro app stores. That didn't set right with me because it makes for precise launching of releases impossible to do.

What's on the table for the future as far as releases are concerned is that I may opt to go with a more independent distro method, and definitely concentrate more on singles than albums.

Concerning the distro, there's one I'm eyeing right now and will try it out with a single. What I want is that when I upload it, it's live. I don't want to deal with that "wait X days, but we won't tell you how many days" crapola before it's live. I also don't want to wait to see results/profits. In other words, I want it all in real-time, and I don't think that's too much to ask. Like I said, I do have my eye on a particular distro site for this. You'll know what it is when I release my next single.

Concerning albums, they're annoying to make - but singles on the other hand are easy, or at least for me they are. That and it's okay for them to be islands, so to speak. There are times when inspiration strikes where I can literally get a whole song completed in just a few hours. And even if it sounds nothing like anything else in my library of music, that's fine as a standalone because it's not connected to any album.

I just want everything to be faster. The writing, the delivery, all of it. I want to be able to finalize a song any time I want, post it for sale, YouTube it and Facebook it all in the same day. Again, I don't think that's too much to ask. 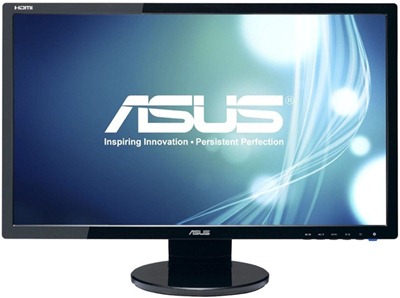 Every Christmas I buy a present for myself, and it's usually something good but nothing too crazy because, well, money's tight as always.

Being the practical bloke I am, I don't usually buy things that serve as nothing but trinkets, ornaments or whatever because that's just wasted money. What I bought this year does serve a very legitimate practical use and is something that will make my computing life a little easier.

This year, my to-me gift was a 24-inch computer monitor, the ASUS VE248H. Price paid was $169 with free shipping. And as I've just learned, the priced jumped to $199 the day after I made my purchase, so I definitely bought it at the right time. NewEgg had the best price because I searched this particular display on eBay and nobody is selling it for under $199 at the moment, so $169 was the best possible price there was. I guess it was in the cards that this was the right time to buy.

The last time I bought a monitor was almost 5 years ago on the nose on 2-Dec-2006, and it was the BenQ FP202W. The price paid for that 20.1-inch monitor was $276.71, and I do distinctly remember feeling I spent too much on it. In retrospect, I should have bought a standard-aspect 19-inch, but whatever. Lesson learned.

The FP202W's display has never been quite right since day one. Yes, it works, but I really noticed how washy the colors are and how fonts fuzz on it when I got my cheap little Dell mini 10v netbook. Everything on the 10v's display is so much clearer compared to the BenQ.

I will give the nod that the FP202W has always been bright and black does show as true black, but there's just something about the way it renders certain things that just doesn't seem quite right, particularly in the font department. Very tough to explain, but believe me, I notice it. My eyes literally start to blur after staring at that monitor too long where I'm more or less forced to use the netbook just to read on-screen stuff properly. There's an option to adjust the sharpness with 1 being sharpest and 5 being soft. I use setting 2 because 1 is too sharp, but on 2 I still don't get that happy medium between 1 and 2. If there were a 1.5 setting, believe me I'd use it.

My now-ancient 17-inch Sony SDM-S73 (which I paid a whopping $500 for in the early 2000s) that I use as my secondary display has always had a better picture, better color and has never had a problem displaying fonts properly whatsoever. I'm actually amazed the thing still works given the abuse it's been through, and it just goes to show that at one time Sony made some awesome stuff. Even on eBay you don't see SDM model Sony monitors for sale often because people refuse to give them up; they're that good. In fact, I'd say it's the best 17-inch LCD VGA monitor you could buy.

Back to the Asus VE248H, it is a matte (meaning not glossy) display, has built-in speakers which I won't be using, the controls are in the correct area (right/under) and has LED-backlighting which is far superior compared to the old incandescent backlight system.

The guy in the video below paid $220 for his last year and said it was a great deal considering what it is.

On the negative side there are reports of ghosting issues with this particular display, however it's said that the reason for this is a specific ASUS monitor feature called "Overdrive" and that it can be disabled completely to rid the vast majority of the ghosting issues.

I don't have the monitor in my possession yet as I just bought it and it'll take a few days before it gets here.

The big risk here buying from NewEgg is they have an 8-dead-pixel policy for monitor returns. Unless there are 8 dead pixels, you can't return it for a replacement. However there was nobody selling this display anywhere near NewEgg's low price point, so I took the risk and went for it. The BenQ was also bought from NewEgg and it never had any pixel issues, so hopefully the ASUS won't either.