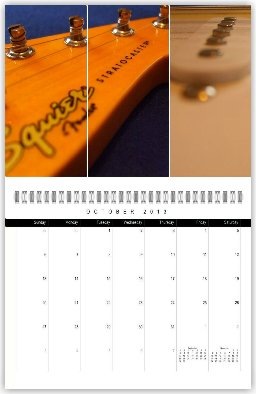 And now it's finally available. I've released a 20-month calendar (May 2012 through December 2013), with each month containing some awesome photos of my guitars.

The three guitars I used were my Squiers. The 1989 Squier II Stratocaster, 2010 Squier Bullet Strat and my modified 2012 Squier Vintage Modified Surf Stratocaster. Photos are cool, but calendars with photos are even better because in addition to seeing cool guitars, you also know what day it is. 🙂