A reminder that time has passed 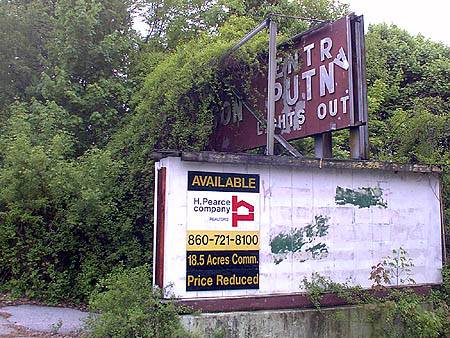 Was on the phone with Ben tonight talking about the movie and had lots of discussions about where the actual showing will take place. I want this movie to be shown in a real movie theater; it's just something I want to do.

There were three movie theaters I went to as a kid. Killingly Cinemas (which still exists), Putnam Twin Drive-in and what is now known as the Bradley Playhouse. Of the three, the Killingly Cinemas was where I frequented most. I saw The Empire Strikes Back and Return of the Jedi there when they were new. Most recently I saw Revenge of the Sith there - and that was a bit on the nostalgic side seeing a Star Wars film there after all those years.

Once I have my film completed I going to try like hell to get a showing in Killingly Cinemas just because that's the place I always went to see movies when I was a kid. It's a sentimental thing.

Pic Above: That's the Putnam Twin Drive-in. It's been closed for years. This is now an old photo. The last time I looked at this place before I moved out of CT, all the land had been cleared out... so someone probably bought it and will do something with the land now. At this place I remember seeing Tron and The Cannonball Run. Any others I don't remember because I was too young. I got a totally weird feeling every time I passed by this lot because I remember going there and now.. it's gone. And it's never coming back. It's not that this drive-in was great or anything, but, I dunno. Maybe I'd rather see nothing at all rather than a broken down lot. I'm hoping whoever bought it does something nice to clean it up. It is a good piece of land.