an internet trend i'm glad has passed: the "fail"

There was a point when the internet was littered with "fail", as in fail photos and videos. It was The Thing To Do On The Internet for a while and everyone was posting fail stuff. Fail officially jumped the shark when people tried (and, pun intended, failed) to commercialize it with failblog.org.

What you'll find at FAILblog now is nothing funny whatsoever, like this: 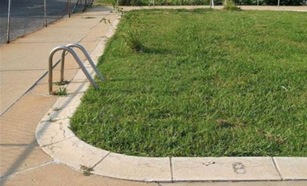 The above is called a "Swimming pool fail", but it's not funny at all. It's just an old swimming pool that was filled in and had grass planted. That's it. Nothing funny here.

On the video side of things, I usually make it a point not to watch any video that has "fail" in the title, because what's usually in the video is a) not funny and/or b) borderline gore.

The majority of fail videos are "had to be there" moments, where the person who shot the video thought it was funny to them, but isn't to anyone else. Everyone thinks their a comedian. They're not.

When a girl posts a fail video, it's usually of her dopey friend in gymnastics class falling on her ass hard, resulting in extreme pain and probably broke a bone in the process. Not funny.

When a boy posts a fail video, it's usually his 12-year-old brother falling off a skateboard on the concrete, face-planting, knocking three teeth out and having blood pouring out of his face. Not funny.

Fail videos are almost always of someone getting hurt badly. All I can think about whenever I see this is how much pain the 'star' of the video went through, and I'm not laughing at all but rather thinking, "Gee... I hope that person is okay."

Watching a fail video can put a real downer on your whole day, so I don't bother with them.

Fortunately, everyone got sick of fail photos and videos real quick and nobody really cares about them anymore, thank God.