and then there was one 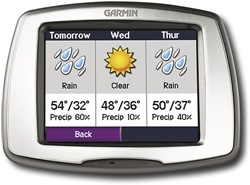 A complaint I have about Garmin is the fact they have way too many models of automotive GPS units. For anyone purchasing a GPS for the first time it is very confusing picking which one to go with. There are 36 models(!) as of this writing.

Another complaint is that they do not make significant software upgrades to their standalone units, but rather replace them outright with another model. In addition to that the models that are current now can go obsolete in less than a year - and that sucks.

The c580, pictured in this post, is now only 1 of 3 StreetPilot models that isn't discontinued. All the rest of them are, including the c550. I own a c580; it's the last of the current "c" series StreetPilots.

I do admittedly want one of the flat-style nuvi units. The one that seems to fit the bill for me is the 255W. There are a few things about it I really like:

It's the arrow on the screen I really want. Here's what it looks like: 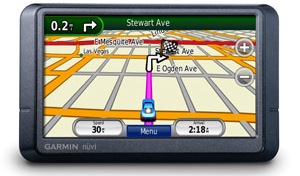 Note the arrow at the top left. This indicates what turn is coming up. My c580 doesn't have this and neither does any other "c" series StreetPilot. Many nuvis don't have this either - but this one does.

That arrow as insignificant as it seems is actually very significant. It gives a visual cue rather than having to read. When driving using one of these this is very important because you can look at this and understand it faster than text-on-screen. There have been many times I wished I had this on my c580.

In addition with this particular nuvi you can use it with the volume completely turned down. Granted, you can do the same with others but the problem is that it does not tell you what direction to turn until you're literally "on top of" where you're supposed to turn.

Although it will be annoying losing the physical turning wheel for the volume control, I'll gladly give it up for that arrow. Hopefully when this model gets into more retailers the price will drop enough so I can grab it.

On a semi-related note:

I was able to successfully push all the data to the StreetPilot i3 I have. Everything loaded up without a problem.

The only real problem I had was updating the unit. When I ran the WebUpdater the unit constantly crashed if I tried to update more than one thing at a time (such as language updates). So what I did is loaded each update individually. Sometimes that worked but I had to force-reboot a few times to get everything to complete - but it did complete.

Unless my i3 has a major electronics failure I'm never getting rid of it. That little guy still performs like a trooper even if it is slower than the newer units with faster processors. I dig the fact you can mount it just about anywhere (even inside the gauge pod of most vehicles). I also dig the fact you can just chuck it in the glovebox and keep it there until you need it.

And of course the best part is that it runs on two AA batteries. Yeah I've said that before but it bears repeating because it really is a selling point. The "i" series are the only automotive GPS units that do not force you to be tethered to a power cable if the batteries die on you. All you have to do is stop by any gas station, pick up 2 more and you're good to go.

Yes, the v7 maps are old and out-of-date but I honestly don't care because that's what my c580 is for.

If you're into GPS like I am I strongly suggest picking one of these up as a backup. Upgrade the microSD to a 1GB or 2GB (you can get these at Wal-Mart), push all the map data to it, update it via WebUpdater and you're done.