Back when text files actually meant something

Recently I finally got around to playing Dark Forces. This is a game that comes bundled with the Star Wars Jedi Knight Collection on Steam. Five games for 20 bucks, and moreover five good games? Sounded like a good deal to me. 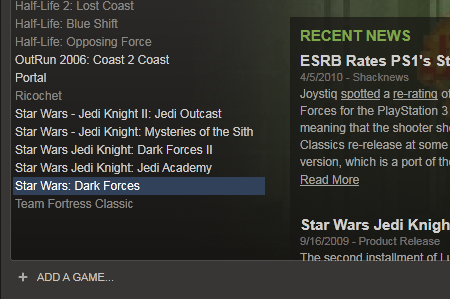 Dark Forces is a DOS game released waaaaaay back in 1995 back when DOS was still the best gaming platform on the planet. To put this in perspective, this was at a time when CD-based game consoles were in their infancy, i.e. the Sony PlayStation. To put that another way, the original Sony PlayStation was brand new in 1995. As a side note, DF was in fact ported for that console at one point.

On release, Dark Forces received some very high praise. It was said that even though it was very DOOM-like, the engine was better and it actually had a very good storyline - which it does.

But here's how the game really is:

Everything in DF looks very blocky

In DOOM, the pixelated look has a charm to it. In DF, it's just annoying. There are several parts of the game where the perspective was set too far away and everything looks like a jumbled mess of pixels. 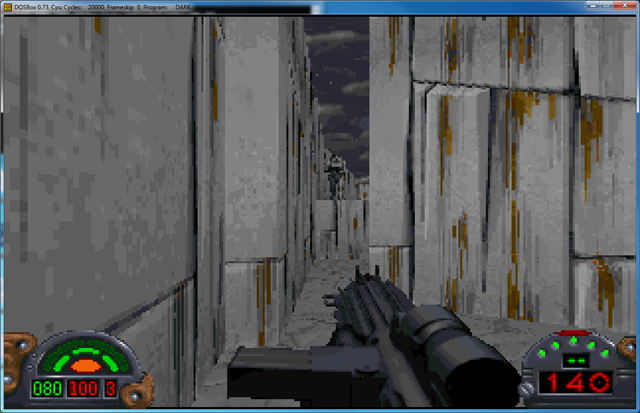 Now you may think, "That doesn't look too bad." Click on the image to view full size, then you'll see what I mean.

The original game resolution I believe is 320x200 or 320x240, hence the blockiness. DF to the best of my knowledge was never updated for higher-resolution play. Heck, even 640x480 would have been nice. That did happen with other LucasArts games like TIE Fighter, but not with DF for whatever reason.

You will get lost, and often

Even though you have an in-game map, you are guaranteed to get lost in DF. It's outright annoying.

DF is not easy

DOOM was easy in the respect you could figure your way around fairly quickly while still having a good fun challenge. DF on the other hand is unbelievably frustrating in some spots.

Let's say for the moment you actually make it through the first mission. It's not that mission 1 is difficult, it's that you're trying to figure out how stuff works. You finally finish the mission and feel you're getting the hang of the game. Oh, no sir. DF will then throw things at you that will take you a while to figure out. You plod along, and then comes a mission where you absolutely cannot figure out what's going on. You run laps around the map trying to figure out what door to open, what lever to push and/or what "code" to enter in a certain spot, but it's all for nothing. You're stuck.

It's at that point where you say to yourself, "This sucks; I need a walkthrough guide."

This is where the text file comes in.

Before continuing, a small but important note: Dark Forces is the only game out of the entire collection where you actually need a walkthrough guide just to finish it. Every other game in the set can be figured out without issue - but not DF.

The year was 1996 and the Internet still in its infancy. Video sharing sites didn't exist and wouldn't for another nine years, so the only way to post walkthrough guides on the Internet was via text files.

Here's the DF walkthrough guide. It's a 150k file of nothing but text. The guide is big. Really big. Huge. Colossal.

What amazes me more than anything else is that the guy who made this doc (who is in fact a real doctor) had to sit down and write all this out manually. We're talking days or possibly weeks worth of writing here, all for free, all for the love of the game. If that isn't dedication, I don't know what is.

The level of detail within the doc is so amazing that it just boggles the mind. It not only includes instructions but also "images" showing charts and maps.

Even though the doc's information is from several authors, it is that one guy that put the big honkin' thing together. He was the "lead" that maintained it.

Game walkthroughs today aren't anything like this anymore. If you want to figure out how to get through a certain level for a game you own, all it takes is a quick search on YouTube and watch videos of someone playing through the missions.

I could have done the same thing for DF, but purposely didn't. At present I'm still finishing the game, and absolutely do not want to watch any videos of it because it will ruin the experience of doing it myself. In addition I'm only referencing to the DF walkthrough when I need to and not following step by step.

Text files of this type aren't dead, but harder to come by. I guess at the end of it all it boils down to a simple question when it comes to docs like this: What's easier, writing documentation or recording a video?

Whatever is easier is what will show up first on the Internet.