categorized favorites in a c-series streetpilot

Recently I discovered that yes, it is possible to categorize waypoints in a c-series StreetPilot. The only disadvantage is the way it's done because to be honest it's a pain in the ass.

Okay, the deal is this: Everyone who uses a StreetPilot uses Favorites, unless you're using a c3xx series in which it would be called "My Locations". Regardless of that, your Favorites is one big long list with no sorting or category options whatsoever. Whenever you go to your Favorites list it will by default show the closest location first no matter where you are.

Is there a way to categorize Favorites at all?

But you don't do it in Favorites.

You use POI's instead.

Here's an example using a StreetPilot c340 (if it were a c580 or any other c5xx series this would be under Where to? > Extras once the POIs are loaded).

I loaded them into the StreetPilot with the POI Loader.

When I go to Where to? > My Locations > Custom POIs, this is what I have: 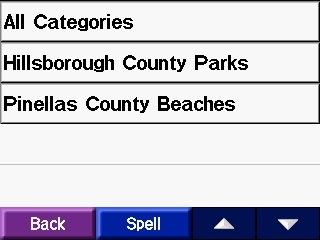 While this may not seem like much, I do have custom categories; something you can't do with Favorites on a c-series StreetPilot.

The categories were named from the file names themselves.

There are three major drawbacks to using waypoints in this fashion:

Once a POI is loaded into the StreetPilot, that's it. It can't be edited or deleted directly. And if you want to add something to a category you have to manually place it in the CSV file then upload it again with the POI Loader.

Granted, this is a step in the right direction, but I really, really wish there was a way to add/edit/delete POIs directly on the StreetPilot itself.