This title of this bloggo is a song from one of KISS' worst-selling albums, Crazy Nights. The song peaked at #65 on the Billboard Hot 100 in 1987; that was as good as it ever did. Considering rock was still the #1 style of music in '87, that's pretty crappy.

If case you didn't know, KISS is a hard rock band that formed in the early 1970s and even now 38 years later they still play. The two original members of the lineup from the 70s are the ripe old ages of 59 and 61.

The band just got off tour last month and decided to take a break going on a boat, sit around, drink beer and fart a lot. Of course, they're making the fans pay for it, starting at $895 a ticket. Yes, really.

I listened to a lot of KISS in the 1990s (which is when most of my teen years were), and particularly liked the stuff from their heydays in the 1970s. The sounds from those studio albums had this raw garage-band style feel to them. Given there was a resurgence of 'raw' rock in the 90s with the whole grunge thing, that old 70s sound fit right in with what I was listening to at the time.

Once you start listening to KISS, you want to know more about the band. Where they came from, how they got started, etc. Unfortunately, the more you learn, the more you realize that the following is true:

Peter is - and I'm really not kidding here - the only member of the band past or present that could be considered a normal guy you'd want to hang out with. When you see Peter as the grand old New Yorker he is (example at right), he's a guy that doesn't appear screwed up at all, doesn't creep you out and is someone you'd want to get to know.

The "Catman" has aged well, talks real (meaning he doesn't act when interviewed) and managed to keep his dignity in tact.

Supposedly in late 2012 he'll be publishing his memoirs. Whether it actually gets delivered then or beforehand is anyone's guess, but eh, who knows. I'll go out on a limb here and say yes, it will be finished and on the shelves by late '12.

As for Ace, he's coming out with a book this November, however compared to Criss' book it's going to be a rather 'interesting' piece of work, putting it mildly.

It's well known that Ace is an on-again/off-again alcoholic, has been for decades and probably always will be. As such he literally can't remember anything of what happened for the past 30 years:

...what [Ace] needed the most help with was making sure he remembered everything accurately - having spent much of those years in an alcoholic haze. "It's hard for me to remember a lot of stuff, so what I’ve been doing is getting together with people I used to work with and usually they have better memories of situations than I do."

What this means is at best you're getting a second hand account of what really happened over the years with Ace's upcoming book. 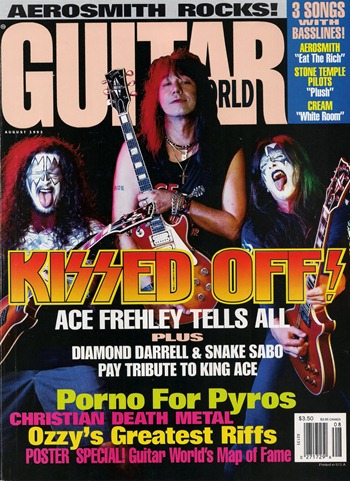 Also in typical Ace style there will probably be a lot of bitching about Gene and Paul contained within the pages, as the book is being billed as a "tell-all", and wow is everyone sick and tired of those things. Nobody cares anymore. There have been so many tell-alls from KISS members over the years that I sincerely wonder whether it's all just publicity stunts to keep people interested in the band.

Ace is no stranger to doing a tell-all and has done it many, many times. I remember seeing the cover of the August 1993 Guitar World (pictured) and thinking, "What the frig is this crap? Who cares?" - and I felt that way 18 years ago.

The new book Ace is doing is basically the same crap as before in book form. What-frickin'-ever.

One can only hope that the book Ace puts out in November will be the last thing he ever puts in print, goes back to music after that and stays there. As far as writing songs goes, yeah, he can still pull that off, but as for the written stuff.. pass. 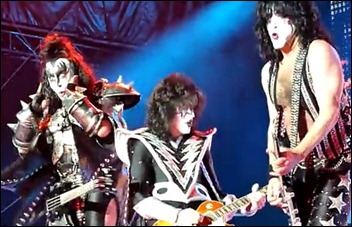 Too old to rock?

Then there is of course the subject brought up by KISS fans and haters again and again on whether these guys are too old to rock or not.

Neil Young, age 65, still plays live and Eric Clapton, age 66 also still plays live. However there's a huge difference between the shows those guys do and what KISS does.

A KISS show is a high-energy performance full of jumping around, fire, explosions and really loud music. The band members can hide their ages easily (for the most part) from the makeup and wigs they wear. As far as the look goes, yeah, they can still pull it off.

As for the performance however, that's a different story. They can still all play their instruments fine, but it's the vocals that suffer more than anything else. Gene and Paul simply cannot hit notes properly anymore.

Observe now vs. then:

Every band has a bad night from time to time, but the first of the above two is how the band always sounds now. There is no such thing as a 'good night' on vocals anymore for KISS and hasn't been for years.

Amazingly.. and I seriously have no clue why the band is doing this.. they're releasing another new album that will be out January 2012. What will it sound like? No idea. Will it be any good? I seriously doubt it.

More importantly, will this be the final album? That's leaning heavily towards a yes. One more album, one more tour (maybe), and then they'll work on other stuff, like.. I dunno.. opening more coffee houses maybe. Who knows.

I guess Gene and Paul just want to make sure they have a big fat-assed retirement fund and need to poop out an album to accomplish that.