I recently discovered something.

I don't like paying for e-mail. There's something about it that has always rubbed me the wrong way.

Those who follow me in tech circles know that I've pretty much tried every type of e-mail that's out there save for Exchange. I've done Yahoo! Mail (and did pay for it at one point), I've done Gmail (with Google Apps), I've done IMAP, blah blah blah.

Currently I'm a paid Hotmail Plus user, but...

Hotmail did nothing to tick me off. Not a thing. As a matter of fact it ran great and I liked it so much I used Windows Live Admin Center (formerly Windows Live Domains) to have my domain mail point to it.

The only reason I stopped using it is because paying for e-mail finally got to me. I just didn't want to do it anymore. It costs 20 bucks a year for a Hotmail Plus account and yeah, it's a whole lot better than standard Hotmail. The spam filters are way better, operation is faster and it's just super-cool-awesome all around.

But you have to pay for that super-cool-awesomeness. Nah. I already pay for web hosting as it is.

You'll never guess what type of e-mail I switched back to.

These are my reasons why:

Before I get into how awesome it is to be back using Thunderbird, here's a question that's tough to answer:

How do you import Windows Live Mail into Mozilla Thunderbird?

First, you need to install this add-on in Thunderbird.

Second, you need to physically locate where Windows Live Mail stores all your mail. This is the kicker.

And yes, it is in fact that long.

Here's a screen shot of what it looks like. 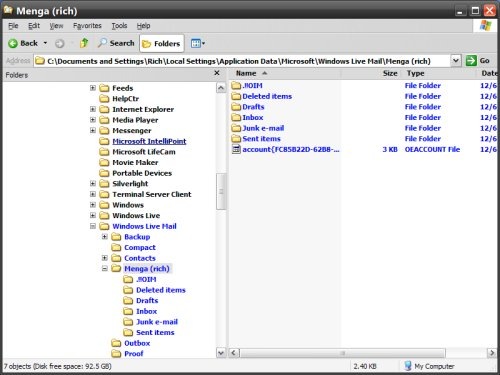 Underneath the account name are all the folders and all the mail that the Windows Live Mail client stored as shown above.

Third, you need to import all this mail into Thunderbird one folder at a time. I've tried doing it as a mass-import and it didn't work - but doing individual folders did.

You first create an empty folder in Thunderbird. Then you right-click that folder, select Import/Export, then Import all eml files from a directory, then just from the directory.

After this comes the "fun" part.

You have to browse all the way down to that deep folder, select what you want to import and hit OK. 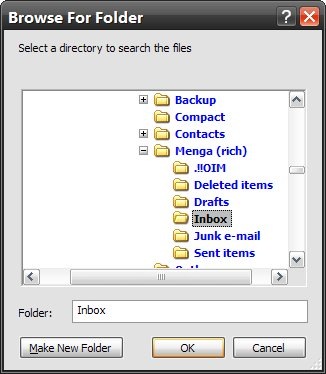 I will guarantee you that you'll forget the path to the folders, so you have to type it out in Notepad or leave a Windows Explorer open just to remember where your mail is.

After that you import each folder one by one. Create folders in Thunderbird to suit for each time you import.

For a gig's worth of e-mail it took me about 20 to 30 minutes. Don't remember how long exactly but it wasn't that long because all the mail is locally transferred.

After that you just set up an account in Thunderbird (if you haven't already) and just drag/drop the mail wherever you want it to go.

A: Because Gmail sucks.

Q: Why didn't I continue to use the Windows Live Mail client with POP instead of Hotmail?

A: I could have done that. But the only reason I was using Windows Live Mail was for the Address Book sync between client and web. Being that I don't need that anymore I prefer the features in Thunderbird even if it is behind the times development-wise.

I really missed Thunderbird. This e-mail client - as far behind as it is - still kicks the crap out of everything else out there free or paid. The fact I have my "tags" back, unlimited filters, a fully-enabled search that searches everything (far better than Gmail or Hotmail ever could) is just plain cool.

Small example: I can set up a filter to deliver specific mails to specific folders and still get a sound notification with a toaster pop-up (which is what I want). Windows Live Mail absolutely won't do this. If it doesn't land in the inbox - you don't get notified at all.

Hotmail hates Yahoo hates Hotmail? Whenever I had to send a mail to anyone with an e-mail address ending in @yahoo.com, even if it was text only, it took at least 5 to 15 minutes to deliver it. I'm not kidding. I never understood that. And the exact same thing happens in reverse. If someone with a Yahoo address sent me mail, it would take forever (figuratively speaking) for me to get it.

I have no clue whether this is done by design or if it's just a fluke.

When I switched back over to my own domain for mail, I sent a test from a Yahoo account and guess what - instantaneous delivery. And when I did a test reply, same result - insta-delivery. That's the way it's supposed to work. Same e-mail address, just not on Hotmail's servers anymore.

I have absolutely no explanation for why this happens, but it does. Yes, the mail does get delivered but it just takes so much longer for reasons unknown.

My mail is fast again

All, repeat, all webmail services are slow compared to using a client. You'd think by now someone would invent a web-based e-mail system that's speedy. Hasn't happened yet.

While it's true my test mail was fast on the Yahoo side, that was only because it was a tiny e-mail sent and received. Anything over than and slo-o-o-o-wness occurs.

This was one of my major problems with Thunderbird before - but I found a nice freeware utility that backs up the mail easily. I'll be writing about that later on (not here but the other big site where I write).

That add-on I mentioned earlier also does folder exports so you could use that also.

It's always been weird that no one e-mail client has ever had a decent way of backing up your mail easily. Not a one. You always have to use a workaround utility just to back up your crap. Funny that.

I like Thunderbird. I've always liked that software. It just does the job better than anything else hands down.

Yeah, this is all very anti-cloud computing, but so what. I don't care. I save $20 a year by using mail this way.