Fire Phone is the first smartphone that doesn't completely annoy me 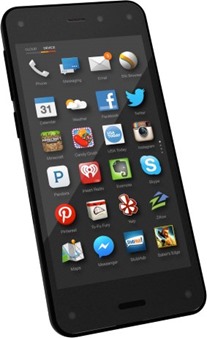 I'm very anti-smartphone almost to a fault. But this is literally the first one where I've said to myself, "Hey, that's actually useful."

Fire Phone is Amazon's latest (first?) entry into the smartphone game. The carrier is AT&T, however one thing I sincerely appreciate up front is that there is the option to buy the phone without a service plan. Yeah, the price spikes when you do that, but the fact you can do it is what matters; it means you can out-of-the-gate buy the phone unlocked, and that's a big deal.

There are cool and not-cool things about the phone.

Cool: You get a year of Amazon Prime for free. Or if you have Prime already, it extends your current membership for a year for free. Prime is one of the best ways to use Amazon because you get free two-day shipping on any product on Amazon that's Prime eligible (which includes a lot of guitars, look for the blue Prime next to prices).

Not Cool: Dynamic Perspective. Gimmicky at best, and the flavor of that will wear off quick. But the one-handed operation thing is the real selling point of the Fire Phone.

Not Cool: Firefly. Also gimmicky. Cool in a way, but... it's a novelty at best, much like Dynamic Perspective.

One-handed operation: VERY COOL. A lot of effort went into this phone to be able to operate it one-handed, and it is without question the best selling point of the handset. There's a ton of one-handed shortcuts and auto-scroll functionality that allows you to scroll anything scrollable (web pages, e-books, etc.) without touching the screen given the whole tilt/swivel it utilizes often.

It's like I said. When I saw the video (which is on the product link), I was watching it and said, "Meh. Meh. Meh. Meh... whoa, wait.. I like that one-handed stuff. That's actually useful."

Yeah, I know, other phones do tilt/swivel, but not like Fire Phone does it. It's the first smartphone I've seen since their introduction(?) that actually shows genuine real ergonomic progress.

The one-handed thing is not just some doodad, it's an actual real reason to own the phone. I could see myself totally getting used to that very quickly.

Will I buy it? Not sure. But I can say, as mentioned in the title, the phone doesn't completely annoy me. 🙂