History of the tunes

(I will be posting pics of the home studio later. Right now the room is completely taken apart due to the fact it's getting painted this week.)

I'm writing this post just to answer the "How did he do that?" when it comes to recording question. (grin) And to also give some insight on my whole music thing.

For well over 10 years I have been doing the musician and home studio recording thing. Here's a brief history of how it all happened:

Ages 6 thru 9: Pop goes out and buys a Casio keyboard for the reason that I wasn't taking to the trumpet too well. And yes, I did play the trumpet for about three months. I think this is the first time I have ever mentioned this anywhere. But anyway, the trumpet thing fell through like a lead balloon. I instantly fall in love with electronic keyboards.

Pre-teen to early teens: I am constantly recording with long time best friend Ben, doing jokes and so on using cassette tapes. I still have a duffle bag full of those old tapes, literally. During this time I am using the Casio's to do music with, one of them being the SK-1 (a tiny little synth - but it did sample!) Others inlcuded several cheapo "Casiotone" boards.

Early teens cont'd.: After going through several Casio boards (I wore them out, literally) I pick up a Roland Juno-60 - a fantastic 61-key analog audio synth, with wood trim and all. One of these days I will have pick up another one of those. Amazing action on those heavy boards. Rock solid construction, too. Price paid: $200 bucks. Had I any idea the board would be as "classic" as it is now, I never would have gotten rid of it.

15 years old: I pick up an electric guitar, the Fender Stratocaster Squier II. After 1 month of guitar lessons, I train myself from there on out, mostly from Black Sabbath Ozzy-era circa 1970 to 1978 (from "Black Sabbath" to "Never Say Die!" - I learned every single song front to back) and Van Halen.. plus some Led Zeppelin here and there. While other people my age were interested in cars and booze, I played. Every day. For many hours at a time.

17 years old: Junior year in high school. I see my first "workstation synthesizer", the Peavey DPM Series. My reaction: "This is the coolest thing.. I.. have.. ever.. seen." I quickly master the DPM and find that sequencing songs is the coolest thing - ever. Shortly thereafter I beg and plead with my pop to buy a workstation synthesizer. The Peavey was not available anywhere. There were only two other synths that would do the job for me, either the Korg M1 or the Ensoniq SQ-1+. The Ensoniq won. Reason? Sounded better (and it does). Bought brand new for around $3000. Note: I sacrified getting a CAR for this synth because I wanted it so bad.

17 years old, cont'd: Played with a band that needed a bass player that summer. All members of this band were well into their mid-to-late 20's so I had a lot to prove. Scrapped together everything I had to my name (at the time) and bought a brand new Epiphone P-style bass for $340 and a used Peavey TNT 100 bass amplifier (don't remember how much was paid for that). Played bass for that band for several months while still honing my guitar skills. End result: Learned the bass backwards and forwards. 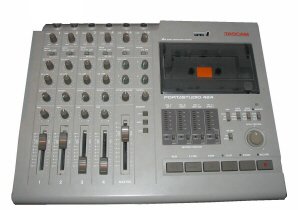 17-18 years old, cont'd: Was able to program/sequence songs on the synth and play guitar along with them, but really needed a way to record parts separately on some type of recording medium. Hmm.. how to do that.. ah, found the answer: Multitrack recording. That year, Tascam introduced the 424 to the market, a 4-track audio cassette recorder. Begged and pleaded with pop once again to buy it. Got it. Price: $525.00

From the rest of my teens to present, here's a short history of what has happened from then until now, not necessarily in chronological order (I don't remember the exact dates). These are the most important things that have happened to me musically. The rest of the crap is crap and doesn't need to be mentioned. 🙂

Stuff that's happened in the past 3 years:

I am actively working on a new music project which I haven't mentioned here before. I have several "scratch tracks" which no one has heard yet. They sound really good (at least I think so). Once I have four or five finished tracks completed, I will acquire a vox and see what happens. I was going to acquire a vox earlier, but decided to put that on hold until I had some new stuff done. Once that's all completed I will start posting ads in a few local circulars. I plan to have something going in the next month or so.

Vintage guitar of the week #4 - 1974 Fender Stratocaster Natural
What Fender did to save a buck in the '70s ended up with a Strat that has a unique look to it.

How to make an animated GIF from a movie clip the free and easy way
GIFs are cool. I pronounce it with a hard 'g'.