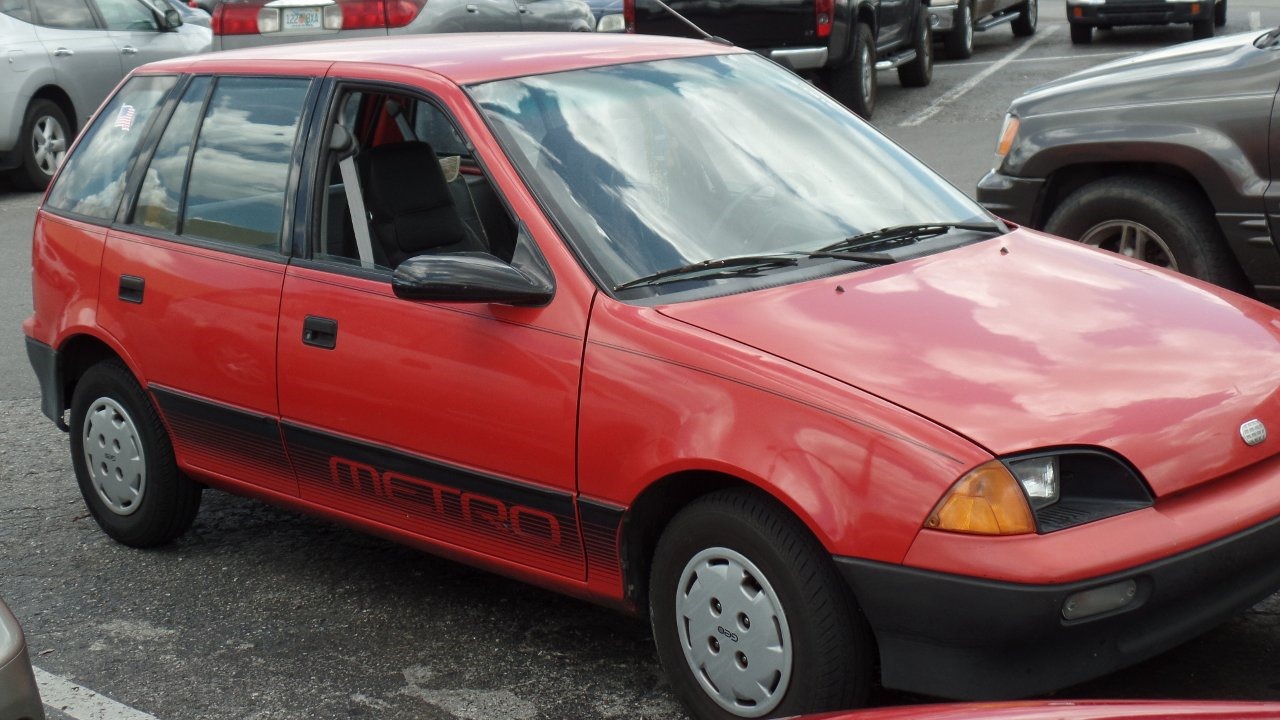 Look what I spotted.

The car you see above is a Geo Metro. It's not my car, but believe it or not, this is a photo I took just recently in a shopping center parking lot. This Metro is in damned fine shape. The wheel covers still look new as does the original paint. How do I know the paint is original? Because of the black sport striping. Nobody would repaint this car and spend extra on that.

And you gotta love the way the owner parked it too. The passenger side window is completely rolled down and there's nobody in the car. It's possible the window doesn't work anymore after all this time. And even if it doesn't, who cares, because who's going to steal it?

As far as when the above Metro was made, that I don't know. What I do know is that it was made in the mid-to-late '90s, so there's a distinct possibility the car is at or over 20 years old. It also definitely looks like the car has lived in Florida its whole life and is probably regularly garaged given how good the original paint still looks.

BUT ANYWAY... I want to talk about trucks again.

If you didn't see my last article on this, I finally got rid of my big, stupid 4x4 truck and switched to a small hatchback. I've been driving the car for few weeks now, and it's great. Truly.

However, there is something not-so great about it. Something I kinda expected. And that's idiot truck drivers that think cutting me off is okay when it's not. But only when I drive a specific way.

This takes a bit of explanation.

There are many pickup truck and SUV drivers that think they own the road. They obviously don't, but they think they do. And when they see smaller cars, they sincerely believe cutting them off is perfectly fine. In Stupid Truck Driver's mind, a small car is no "threat" to them...

...and when that happens, this happens:

If I drive at the speed limit, trucks give me grief. Really annoying. Conversely, when I drive in a spirited style, drivers of big, stupid trucks don't give me any grief.

Spirited doesn't mean aggressive, because driving aggressively is stupid. Spirited just means zipping around in a non-aggressive way. If you own a small car or even a midsize sedan, you know what zipping is. When I'm driving in a spirited way around town or in the city, trucks back off and I know why. It's because there's no way to drive a truck spirited without turning it into a rolling death machine. How do I know this? First hand experience from driving a stupid pickup for over 10 years.

I discovered another unintended bonus to driving a hatchback. Other small car drivers do give me room and don't cut me off. As it turns out, they hate trucks too.

When I was driving a truck, I got cut off so often that I just got used to it and just thought, "Meh. Florida drivers. Whatever." But as a hatchback driver, only trucks cut me off now.

I will admit there are plenty of truck drivers who unintentionally drive like dicks because the outward visibility of a truck is so poor. The combination of sitting too high, a tall bed box, and the squared-off rear quarters of the vehicle make it impossible to get a clear aft view. In fact, the only way to truly get a clear aft view when driving a pickup is to drive with the tailgate down at all times. But of course, nobody does that.

What ends up happening is that even with properly set up rear view mirrors, pickup and SUV drivers cut off cars all the time simply because they can't see them, and that's how pickup/SUV drivers unintentionally drive like dicks. It's even routine that if solely "driving by mirrors" in a big, stupid truck, which a lot of truck drivers do, you can even lose an entire midsize sedan.

The solution to the visibility problem? Other than driving with the gate down, nothing. It's just bad design.

Trucks are stupid. I hate them.

I would seriously take the Metro over any truck any day of the week and twice on Sunday.