Is the PC dead for real this time? 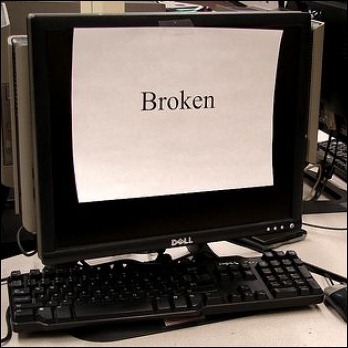 In the technology world, very little ever truly dies, but rather just fades away. An example of this is that there are some people who still use pagers (mostly for people who perform maintenance work of some kind).

But this time it's different. PCs are genuinely in danger of being put into "dead" status this time, and I'll tell you exactly why.

"Dead" in the context I'm speaking of is defined as "not mainstream". When people see "dead", then immediately think, "vanished"; that's not what I'm saying. As said above, no technology ever truly dies but rather just slips out of the mainstream consumer market and never comes back.

I have dropped link after link after link after link like this one which clearly shows that PCs are in big frickin' trouble, as in a sales slump they have not been able to pull out of on a worldwide basis. IDC Research Group, whose reports are arguably the be-all/end-all when it comes to sales reports indicate in a very damning way that PCs have dived in sales for two years in a row during the holiday season - and that's when all the real sales are made because that's when consumers are buying the most stuff.

I could drop 20 or even 50 links, all from very reputable sources, all saying the same thing: The PC is dying.

But let's say for the moment you don't believe any of those figures even though they've been proven time and time again to be accurate.

If you don't believe me, again, go look for yourself. No matter where in the world you are, all the stores are doing the same thing.

And I want to make something very clear, phones and tablets are not a fad. They are entrenched in the market and are all being put front and center.

Gaming will not "save" the PC

It is very easy to look at what happened with Diablo III in 2012 and think that gaming is going to save the PC, being that D3 busted sales records in a very positive way.

However, that did not bring PCs out of their sales slump. Not even close.

When anyone mentions the PC's staying power, the first word spewed out is "GAMERS!!!1!11!!" No, no... sorry. Gamers will not save the day for the PC. Not happening. Again I will remind you that not even the mighty Diablo III could do it. And when you take into account all the other PC games sales, they didn't save they day either for the PC.

I've got two words for you: Angry Birds.

Now check this out: Think D3's sales figures are impressive? They're nothing compared to Angry Birds, which currently stands at OVER 12 MILLION SOLD [correction] which has been downloaded will over 500 MILLION TIMES, and that was back in 2011! D3 is nowhere close to that figure and never will be.

At the end of the day, it's all about how much or how little was sold that determines whether anything in the electronics market has true staying power or not.

The bitter truth is that people are simply not buying PCs. Two years of negative direction sales in a row don't lie. The immense popularity of phone app sales trouncing PC game sales don't lie. The department and electronics stores all shoving PCs to the back don't lie either, because they know what sells best.

How much more proof do you need? I'm not saying any of this to insult you, believe me. I'm saying just to look around and see what's happening both on AND OFF the internet. Look for your PCs where you shop. Do you see them? And if so, do you have good choice? I'm betting the answer is a big "no" on that one.

"Professional" = workstation-style computers needed in offices for things like graphics design, the sciences, research and development, and so on.

"Hobbyist Territory" = the way PC sales were prior to the internet becoming popular circa the early 1990s.

Since most who read this will be the hobbyist type, I'll explain more in detail what that means.

In the early 90s, PCs were still in nerds-only territory; this was at a time when the online experience was via the BBS, America Online, Prodigy or CompuServe. I was using BBSes back then (in MS-DOS, thank you very much).

The PC community of the 90s was fairly tight-knit, it was a great time for gaming and there actually used to be real "computer stores" back then. And I mean the kind that were smaller and not the big-box electronics retailers like Best Buy.

This "computer store" I mention is something I'm sure will make a comeback once the PC falls out of the mainstream light, similar to how there are now small-time hobbyist electronics repair shops who repair old cassette decks and record players.

I'm also sure computer clubs, as in the real-life kind, will also come back once PCs are out of the mainstream. Gamers may even start having LAN parties again (which would be cool).

I know that PCs are on their way out. I knew about this at the start of 2012, never mind 2013. When I read all the reports of what the manufacturers had planned, combined with the already-known PC sales slump then, I knew PCs were in huge trouble.

But the blunt honest truth is that I hate tablets.

Yep, I said it, and it's true. I hate tablets. I hate them because they're built to be disposable. I hate that it's basically impossible to upgrade one. I hate the walled-garden environment of a mobile OS. I hate the touchscreen. I hate everything about it.

See, even though I know PCs are on death's door in the mainstream arena, I'm not going to cling to it and "defend" the PC as if it's a member of my family. Things change with electronics, and that's the way it is.

The entire reason the electronics industry has such a hard-on for tablets is because of these reasons:

Yes, tablets are a total snow-job. I totally see that. I GET THAT. I never in my life claimed to be a fan of the tablet-style computer because I sincerely believe it is a bad, counterproductive way of computing.

So don't think for a second I'm pro-tablet, because I'm not. In fact, I'm anti-tablet. But I also see how the retail industry is treating the PC. They hate it and want it gone because it's big, bulky and hard to sell. They love mobile because it's small, light and easy to sell - and at the end of it all, that's what's going to kill the PC.