my retro has limits 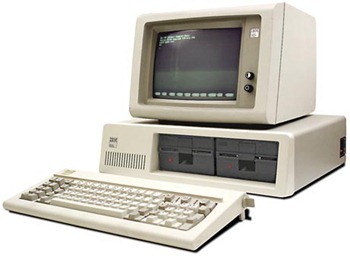 The IBM PC officially turned 30 last Friday (it was originally released August 12, 1981), so I figured I'd do up a bloggo on why I own barely any vintage computer hardware.

I do not like most vintage computer hardware because it's largely unusable, and that argues with my practical side. I like things to be small, tidy and efficient whenever possible.

The PC seen at right is the IBM 5150, the very first computer classified as PC put to market. Is it cool looking? Yes, because it commands attention. It's a very-square, very-business looking machine that looks powerful. When compared to a Commodore 64 or Apple II, the sheer look of it just makes you think, "Whoa. I wonder what that box can do?" You saw this on a desk and it just commanded respect.

That respect ends quickly however when you realize you can't do a thing with it.

No graphical interface (text only). No mouse. No sound card (PC speaker only). The 5150 is an island, and a lonely one at that.

Can you get a 5150 on the internet? Barely. It is possible, but I personally wouldn't do it.

I basically won't touch a computer that can't be connected to my local network, meaning I'll only use 32-bit and up territory, meaning 386DX or greater.

To this day you can still rock a 386 if you wanted to. A high-end DX/40MHz with 16MB RAM will run Windows 95 easily. If Win95 is too heavy, DOS 6.22 and Windows for Workgroups 3.11 will allow relatively easy TCP/IP networking assuming you know how to do it.

Is it all about Windows? Yes. You can run mIRC. You can run a basic graphical browser like an early IE or Netscape or even Opera. You can do email. All of that is possible on a 32-bit system with Windows.

I like my retro, don't get me wrong, but if I can't do basic internet stuff with that old computer box, um... no. 🙂