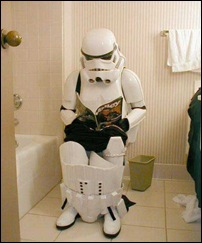 I've been doing some nerdy crapola the past few days, and since there's really nothing else major to report, that's what I'm going to write about. 😉

I switched back to Thunderbird from Windows Live Mail. Hotmail worked fine and all that but I missed the features that I get with t-bird.

My Flickr Pro account will be coming up for renewal in June. And even though it's only 25 bucks to renew for the year I probably won't be doing it because I'm in hardcore bill-pay mode at the moment, and will continue to be for a while. That being the case, I am in the slow arduous process of moving all the images back to this domain. There are several hundred posts I have to "convert" over. Pain in the ass, to say the least. But I gotta do what I gotta do.

The first thing people will notice is a hotlink nastygram if viewing this from an RSS reader for where images are. I have to do this because otherwise I'll run out of bandwidth real fast. Secondly I can't put super-high quality images here because I simply don't have the space, but that's not really a big deal for most people.

I am behind on the books that I need to finish. One is somewhat done and then there are a few more I have to write. The entire reason I haven't been working on them is because I'm been farting around with Windows 7 - which by the way is working awesome so far.

Lastly, because of the new Star Trek movie that's out, the voice file I made for GPS years ago is getting attention once again. Who'da thunk it.