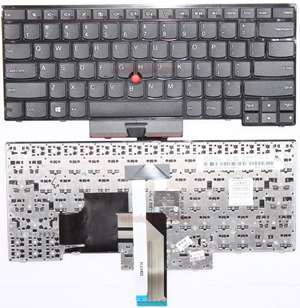 Due to a screw-up that was completely my fault, I had to order a replacement keyboard for my Lenovo E430.

The screw-up was me spilling a small amount of tea on the keyboard. It didn't ruin it, nor did it make anything non-functional (which surprised me as it's a testament to Lenovo build quality,) but some of the keys are now sticky and there's no way to clean them totally once that happens.

Can you pop off laptop keyboard keys? Yes, but there's a problem and a rather big one at that. Keys are mounted differently per laptop manufacturer, and laptop keyboards have wildly different configurations from make to make, model to model.

I wasn't willing to take the risk of breaking a key, so I outright ordered a new keyboard direct from China, and it should arrive before the end of the week.

Fortunately, swapping out a keyboard on a Lenovo is fairly straightforward.

This is a model similar to mine. The only difficult part is where you have to push back and get a butter knife to push slightly so the mounting tabs clear out of the way. After that, flip up, over, disconnect ribbon connectors, install new keyboard, slide in, screw down, done deal.

I'm thankful that the trackpad is not part of the keyboard assembly, because those are a bitch to get out more often than not.

The total cost for the one I bought was $36, shipping included. Expensive? Not really, considering it's new, and the fact other makes/models sell for over $50 easily.

I call my laptop "Ye Olde Lenovo E430" because I bought it specifically for the fact it came bundled with Windows 7 Professional on it. To date, I've never used Windows 8. However, Windows 10 is looking quite nice. I've seen previews of it, and that seems like the next good version. But I doubt I'll "upgrade" to that being my Win7 installation works as well as it does.

An Intel Core i5-3210M is still a fairly quick CPU these days, at least on a laptop. I'm still running the stock 4GB of RAM. The laptop can support up to 16GB RAM via 2 sticks. Totally not necessary. At some point I'll add in another stick for 8GB, because in all honesty, on a laptop, Win7 can't really utilize much more than that.

I won't see any significant speed improvement with another 4GB on-board, but my web browser will be able to handle a lot more tabs. There are times when I'll have something like 20+ tabs open, several of which have heavy scripting and Flash running, and it's during those times that another 4GB would come in handy... but certainly not 16GB. That would just be a waste of cash.

Another advantage of having that extra 4GB will be that video rendering will be faster, no doubt about that.

The reason my "Windows Experience Index" is at 5.1 is because of the integrated graphics, otherwise I'd be at 5.9 or 6.0. That doesn't matter much to me because I bought the laptop for work and not for gaming.

So anyway, yeah, new keyboard on the way. My only concern is that I hope there isn't any joystick drift. That red dot you see in the center is something ThinkPads still use to this day for mouse movement (you can use the trackpad or the joystick or both.) But the only drawback is that sometimes you get "drifting cursor" even on brand new keyboards. But being this a keyboard manufactured well into the unit's life span, I should be okay and there should be no drift.