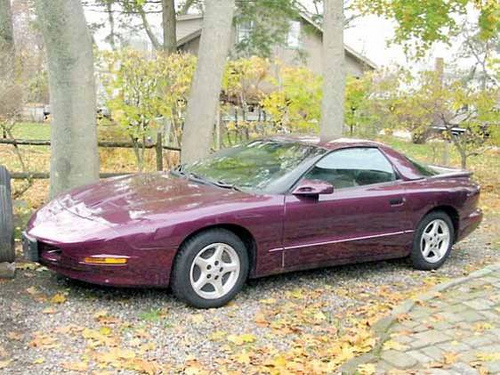 I've been banging around the idea of getting another car again. Since I sold the truck I'm now a one-vehicle owner. Previous to that (since 1998 actually) I've always had two cars. And as I've said before, anyone can own two vehicles. It's really easy and you don't have to be wealthy. For some reason people think you have to be loaded to have two vehicles. No, you don't, but, you do need a space to park it. Fortunately, I do. 😉

Seems the gas crunch is really hitting people hard who are trying to sell sports cars, and I may cash in on it. I would like a secondary vehicle that looks nice, drives well and has a bit of sport to it. The Firebird definitely fits the bill. Although I wouldn't spend $4500 (too much for secondary car,) I would do $3000... maybe. It depends.

I said before I was possibly going to look into getting a "beater" car, but after thinking about it.. nah. If I'm going to get something as a secondary, it should be nice looking. As long as it gets around 22mpg, that is more than enough considering it's going to be for around-town driving mostly.

In a few months the credit card will be paid off (FINALLY). Maybe a Firebird is in my future? Maybe. Then again, maybe not. I don't like the idea of paying extra insurance each month.

You do only live once, and I did own a Camaro before and really liked it. As materialistic as this sounds, life is way to short to go through it driving a crappy car. Now while it's true I have a decent truck to toot around in these days, Firebirds are just plain cool.. at least I think they are. And I miss driving a sports car, or in this case a "sporty" car (it's only a V6).

The car may or may not happen. Finances will dictate the future on that front. 🙂