Old camera on the way 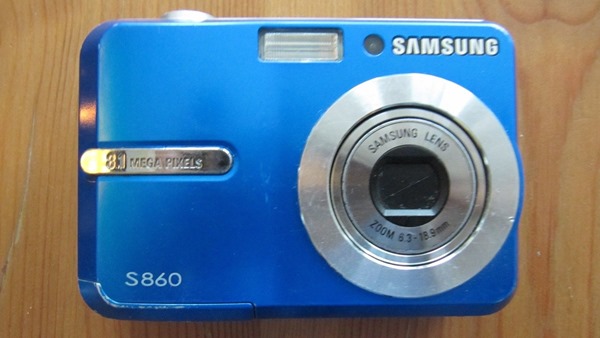 Above is a camera very similar to one I just bought, a Samsung S860 in what's best described as a candy blue color casing. You can find that camera on eBay or on Amazon. It comes in the colors of black, silver, blue, light blue and pink. I would have preferred a black one, but given the price I bought mine for, I was willing to accept the candy blue color.

I don't have the camera yet as it will be arriving next week, and I am looking forward to receiving it.

The price I paid? 20 bucks, shipping included. Yeah, it's a little beat up, again similar to the photo above, but the seller said everything on it works.

How I came to buy this particular camera involves a bit of a story.

I was talking about older digital cameras recently, and for a while now I've been wanting to get another. It's not that my FujiFilm A820 doesn't work. That camera still works fine, but the lens motor has definitely seen better days.

I did not want another A820, even though they are readily available and cheap, so I started searching around for other cheap point-and-shoot cameras that would get the job done.

Right now, the absolute best new bargain point-and-shoot is the Kodak C195, readily available at the moment on eBay and Amazon. The price? Less than 50 bucks. It's a 14-megapixel camera, has a great lens on it and comes in silver, red, blue or purple. Why is this camera so cheap? Because Kodak's entire consumer camera business is phased out. As far as I know, every new Kodak point-and-shoot for sale right now is deeply discounted because sellers just want them gone. Ordinarily, the C195 would sell for around $75, so if you want a point-and-shoot that's new, cheap and good that you can just thrash around and not care, get a C195 now. Once those C195s are gone, they're not coming back except in eBay auctions, where the prices are sure to be gouged.

Being I did not want to spend 50 bucks, I didn't buy one. The absolute most cash I was willing to put into another camera was $35.

One of the best point-and-shoot cameras that's in the 8MP range is the Canon A590 IS. I tried getting one of these off eBay twice, and failed both times because people want way too much for it. The "IS" means "Image Stabilization," but that's not the best part of the camera. The two best parts is that it has a real-deal viewfinder and of course a great Canon lens on it.

Is the A590 IS bulky? Yes, it has some bulk to it. And it's a bit on the heavy side. But it's a solid build, and there's one other huge perk to it that you never see on point-and-shoots anymore. You can attach different lenses to it. So the combo of it being small (for what it is), point-and-shoot, having a real viewfinder and the ability to attach different lenses to it is what makes it so great...

After my two failed attempts to get that Canon for a reasonable price, I started looking at other brands. Several were good from the 8-megapixel era (cameras made from around 2007 to 2009,) including Panasonic LUMIX and Casio EXILIM models. But the problem is that most of them have proprietary batteries, and those just suck. It also means on purchase of the camera there is pretty much a guarantee you will have to buy two new proprietary replacement batteries and a charger, which adds in about 50 bucks of extra cost. And there is no guarantee those new batteries will even work right. Nope, not doing that.

What I wanted was a camera that runs off two AA batteries and uses SD card media storage. The Canon A590 IS is one of those. After a lot of searching around and looking on Flickr for photo samples, the next best thing was the Samsung S860.

The S860 does run off two AAs and uses SD. And while it doesn't have a viewfinder, what it does have is a good lens and is absolutely packed with software features, many of which are only available on high-end models today.

Here are a few:

There's more, but like I said, the S860 really is packed with good stuff.

The common problems with the S860 are this:

But... when I read further into customer reviews (mostly on Amazon) from those who bought this back when it was new, 100% of problems reported were caused by user error. Yes, all of them.

What happened is that people bought the S860, and it didn't operate as fast as they liked. So they would try to force it to operate faster, usually by mashing buttons repeatedly. This, of course, would lock the camera right up. After doing this over and over again, the camera would fail and people would rate it as junk.

This is what truly happened before any of those customer reviews were written:

If I bang on this thing enough and mash enough buttons, I will make it work...

I know. I will go write a nasty review and blame the manufacturer even though I'm the one who broke this thing, and say BUYER BEWARE in all-caps like an idiot at least three times.

Yeah, that will make me feel better. And if I don't get my money back for the thing I broke, I'LL JUST YELL LOUDER WITH MORE BAD REVIEWS UNTIL I DO!!!

The battery-eating thing was, again, user error. If you use a point-and-shoot and have the flash on for every photo taken, OF COURSE the batteries will die fast on you. Turn OFF the flash, disable Face Detection (S860 feature) so the lens motor doesn't have to work as hard, and ta-da, batteries last longer.

I've seen a lot of reviews on AA-powered cameras posted by idiots that say the battery life sucks irrespective of who made the camera. Well, genius, turn off the frickin' flash, learn how to use the thing so the lens motor isn't constantly adjusting, and your batteries will last twice to three times as long. DUH.

This is, by the way, why people love smartphone cameras so much. Smartphone cameras are made for stupid people; it uses nothing more than a tiny, crappy fixed-focus lens so there's no wear on the battery from lens motor use since there is none. Everything is set to be as automatic as possible, so even the dumbest knuckle-dragger can take a photo with one...

...and yet as stupidly simple as they're designed, people still haven't figured out how to take proper photos with one. The struggle continues.

I'm hoping it is. Certain digital cameras released in the late 2000s era were real gems in the fight for dominance in the market, especially from brands you wouldn't ordinarily think of.

Samsung is not a brand people think of when it comes to digital cameras, so in order to make what they made more attractive, they packed more features in their offerings. A few other brands that really stood out well were Panasonic, Casio and General Electric. Yes, there were a few "GE" models released in the late 2000s that were really good.

Does Samsung still make cameras? Yes. They never stopped making them. A modern point-and-shoot offering is the 16.3-megapixel WB350 model. That is a crazy-good point-and-shoot. Has Wi-Fi connectivity, 1080p HD video recording, amazing lens, and just... wow. Yeah, it's a bit up there in price, but yeah, nice camera. The brown textured casing with the vintage-yet-modern appearance is an amazing look too. And 21x optical zoom?! Yes, it has it. That alone makes it worth its price.

One of these days I will get a ritzy point-and-shoot like the WB350, but for now I'm sticking to cheap cameras.

I'm hoping the S860 I receive works okay. It's six years old (maybe seven depending on manufacturing date) and a little scratched up, but if it works right, I couldn't have done better for just 20 bucks.

True, the camera case is a dopey blue, and that does make it look like a kid's toy. But again, it was 20 bucks shipped.

There is one big advantage to the camera being dopey blue. Nobody will ever think of stealing it. 🙂