probably going for a nuvi 205W

I've written about this before but I have some updated info.

Today I headed over to the Garmin web site to read up on my next GPS which will most likely be the nüvi 205W. I noticed that (finally) they had the full owner's manual available for download as a PDF. So I downloaded it and read up on the features that are in the unit.

The 205 (non-widescreen) you can grab from NewEgg right now for a low price. Not ridiculously low, but close. The 205W on the other hand is still priced too high so I'm waiting for it to go down (a lot) before I take the plunge. The only reason retailers are pricing it higher than the 205 is because it's wide and nothing more. To be honest, the widescreen is absolutely not worth that much more. The only reason I want the wide specifically is for the QWERTY layout "keyboard".

Feature-wise the 205W is notably inferior compared to my existing StreetPilot c580 in many respects. The built-in speaker is chintzy, it doesn't speak street names, it doesn't have Bluetooth, the map data set is North America (contiguous) only with no Canada maps and there's a few other choice things the 205W doesn't have.

So why am I going to go for a nüvi 205W even though I have the oh-so awesome StreetPilot c580? 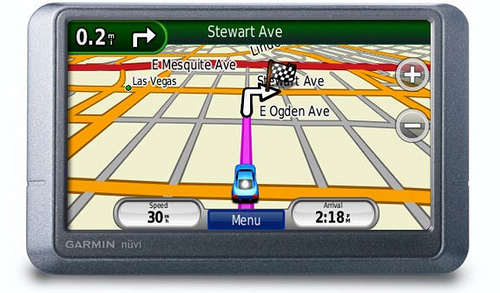 Garmin should have put this arrow in all auto GPS units from day one but didn't. None of the "c" series StreetPilots ever had it (including my c580); rather only the on-screen white arrow that at times is not visible because of the auto-zoom function that you can't turn off (you can on the super-expensive units). 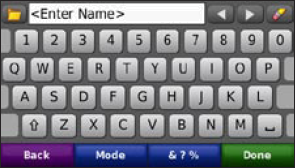 This layout is only available on widescreen Garmin GPS units, including the 205W. I want this so bad.. you have no idea. The standard layout is absolutely eff'ing terrible.

This is what the standard layout looks like on my c580: 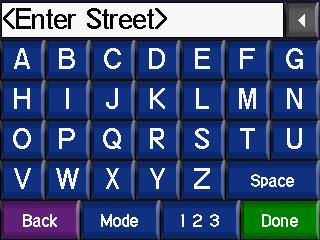 You don't get numbers unless you hit the 123 at the bottom and that ABCDE layout is maddening to work with. I can guarantee you will never be able to "type" as accurately on it as you would with a QWERTY layout.

This is another feature that FINALLY made its way into Garmin GPS units. Believe it or not it wasn't there until fairly recently. Once again, none of the "c" series units have this feature.

However - it's still not perfect and I'll tell you why.

While it's true when you tap Where am I? the unit will give you the closest known location, the unit while in non-navigation mode never says what town or state you're in on the green text bar unless you specifically try to locate a business from Where To? Yes, you will sometimes see "dots" representing towns, but you don't know the state, nor is the "dot" representative of a town border - it marks the center of the town. Confused? That's the way Garmin made it unfortunately.

How cool it would be if the unit displayed "Entering [town, state]" on the top green text bar when crossing a border in non-nav mode? Very cool, that's what. But there's not a single Garmin GPS that has ever done this. Ever. I'm sure there will be eventually but not for a good long while - unless the super-duper-pooper wicked expensive nüvis have this feature and I don't know about it. And even if they do, why should anyone have to shell out $500+ for a GPS just for this insanely simple feature?

The chunkiest Garmin GPS I ever owned was the c340. That unit was a beast, no question. It worked great, but was still a beast. And the mounting system for it was a nightmare to work with. The suction cup didn't work that well and when on the plate mount it "stood" so tall it was ridiculous.

The c580 is not nearly as chunky as the c340 is and I use a friction mount (a.k.a. "bean bag" mount) for it. I do not regret the c580 purchase at all because it outdoes everything the c340 could do and a whole lot more.

But ah, the nüvi. Thin. Really thin. And I can use the same friction mount I have now to boot...

I can use double-sided velcro to mount it to the center stack of the dashboard (not on the airbag obviously).

When will I get it?

Unless I get score a super-good deal on one, not any time soon.

However maybe I will? Who knows.