sega outrun 2006 and the truth about arcade machines

I am a sorta/kinda arcade game buff. In fact, I did own a Mortal Kombat 3 true-blue arcade machine at one point. More on that in a moment.

Okay, so I bought a video game; something I don't do very often. It was an online purchase thru Steam for Sega OutRun 2006 Coast 2 Coast. The reason I bought it is because it was relatively cheap and it's a racing game. I love racing games. Always have.

This game is worthy enough to be called OutRun. As arcade buffs know, the original arcade Out Run was a huge hit. It was difficult to play (mainly due to the fact the graphics would darn near give you vertigo) but what made it work was the music. And the steering wheel physically shook when you hit debris, another car or crashed. That was cool.

The programmers of OutRun 2006 made sure to put in plenty of classic original Out Run elements, such as the red Ferrari Testarossa and the ability to play original BGM (background music) from the 1986 release.

And the game is just a blast to play as well.

Glad I bought it. Thumbs up.

Now on to arcade machines. I mentioned above I owned one at one point. This is true. Any kid who grew up in the 80's desperately wanted the real-deal insert-coin big-ass box. I had one.

And I barely played it.

Let me inform you of why owning an arcade machine may not be the best idea in the world.

People don't truly realize how large one of these machines is until it's in your house. While it's true most aren't heavy (one man can easily move one usually, i.e. drag it around), it is tall and wide. The thing has some girth to it.

2. It eats electricity for breakfast.

Even today, arcade machines aren't exactly what you'd call "green". From the moment you turn one on it's an electric eating monster. The older ones are notorious for this. Newer ones at least have modern electric component that eat somewhat less electricity. Repeat: Somewhat.

This is the biggest reason why most coin-op arcade machine owners never play their machines. These big huge boxes, while cool looking, sit there and get relegated to being nothing but conversation pieces.

In addition to that, you experience none of the magic of an arcade playing the big box at home. Why? Because your house isn't an arcade.

The guys who actually collect these boxes understand this completely. Maybe once in a great while they'll play a round or two but don't do much more than that.

I still want another arcade machine - however the next one I get will actually have a purpose other than being a game.

Something you never see anymore (although easy enough to buy) are cocktail-table versions of the classics. This is a two-seater setup where you stare down at a table in order to play. 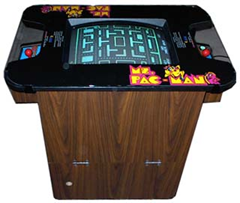 The one I want is Ms. Pac-Man. Small chairs are put on either side and when the game is not in use it can actually be used as a regular table, albeit a small one.

Prices are anywhere from a few hundred used to a few thousand brand new. And yes there are companies that do that and even include warranties on the product.

At least with a table you have something that can be used for something other than a game; it's not just the big hulking box sitting there doing nothing.

See there? Functional, practical and super-cool at the same time. 😀