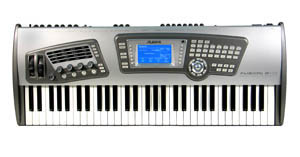 I decided to go ahead and purchase the Alesis Fusion 6HD. I read several reviews on it (such as the ones at Harmony Central) and the overall word is good - with the exception that the first OS released in the unit had a boatload of bugs in it, however, my unit will be shipped with the new and (hopefully) bug-free OS 1.21.

Gripes about the Alesis are as follows from what I've read:

It "doesn't perform well on stage". I personally think it's gear-suicide to put any workstation synthesizer on stage. After all, there's a reason it's called a "workstation" to begin with. Synths of this caliber aren't supposed to be used in live on-stage conditions. You're just inviting the unit to get wrecked by doing that. Better to just have an stage-only MIDI controller, or better yet just another synth that you wouldn't mind getting the crap kicked out of. I learned years ago that putting workstation synths on stage is just a bad idea.

Lots of people compare the Fusion to the Triton (Korg). I don't hide the fact I hate Korgs. Ever since the M1, there hasn't been a single Korg I've played that wasn't a total piece of garbage (with the exception of the 01/W - that wasn't bad). Cheap build, cheap parts, horrible support, bad manuals... you name it. I've had nothing but bad experiences with them. The last Korg I bought (N364) was absolutely worthless. The lowest "C" key stopped working for no reason and it was impossible to get anything done with it. Sequencing was a chore at best. Menu system was abysmal. It reminded me of why I hate Korgs. I was happy to get rid of it when I did. They just suck.

Some comment that the pianos aren't realistic enough. I have to bear in mind that those comments are from musician's ears. I will decide for myself whether the pianos are good or not. Many keyboard buffs judge synths on their piano realism; it's the first thing they listen to (me included). Of all sounds to emulate, the piano is one of the toughest. Some are able to nail it, some don't. The ones that don't suffer from what is best described as a "flat" or "brittle" sound, or for lack of a better description is too "synthy". I mentioned the 01/W above as the sole Korg I actually liked. One of the reasons I liked it is because it seemed to express piano very well. This isn't to say it sounded perfect, but it flowed well. And yes there is a difference between expression and sound.

Almost every review I read had comments that it's very difficult to reach the polyphony limit. This is good and it's a big selling point with me. Polyphony in layman's terms is how many voices can be played (and heard) at the same time. For example, if a synth has 32-voice polyphony, this means it can play 32 sounds at once without cancelling out other sounds. Does this mean you can hold down 32 keys and have all notes played? Not necessarily. Each key you press might be playing a sound that has multiple voices. If you're playing a sound that has 3 voices each, you can only play 10 notes at a time. With 4 voices each, you can only play 8 notes and you run out of polyphony damn quick. Those who have played the Alesis state you can have very dense mixes and it keeps coming back for more, so I'm definitely looking forward to that.

It has been said the Alesis a solid unit. Definition of "solid" to most synth workstation users means: The program keys are decent and don't feel cheap, the menu system is relatively easy to learn and use, the expressiveness is good and (most importantly,) it does what you ask it to do without complaint. Synth workstations aren't just keyboards that play sounds. These are computers with keys more or less, leaning towards the "more" side. When you program sequences into the board and string those into a song, the song should play back exactly as you programmed it. There shouldn't be any unwanted surprises, like an effects bus that acts crazy, or having cancelled-out notes or some other damn thing. It should just work. From what I've read, it seems to work as intended.

The only big unknown I'm facing is how it will actually sound. Considering that my most recent synth workstation (Ensoniq MR-61) is over a decade old, I'm assuming that synth technology has progressed far enough now where all sounds are above par. Yes, I know assumptions are bad, but there weren't any Alesis dealers near where I live so I couldn't try it out in person unfortunately.

If the Alesis Fusion 6HD proves to live up to what I've read, I will retire the MR-61 permanently. I'll literally have to throw it out because I don't think anyone would want a synth workstation that has keys that don't work. (grin) But as for my Ensoniq SQ-1+, I'm never getting rid of that. I liked it so much I bought a second one - along with another Alesis Datadisk SQ to store songs to. The SQ-1+ is in near-mint shape and the Datadisk SQ is in mint shape. Heck, I might even pick up an old Voice Crystal card for the SQ-1+ (but not from idiots who charge 30 bucks for them when they're not even worth 5 - even as a set).

Side note: The fact the Ensoniq and the Datadisk both have "SQ" in their model names is strictly coincidence, albeit a good one.

I will write up a review of the Fusion 6HD once I receive it and tinker with it a bit.