Recently (as in over the past few months) there have been two red light cameras placed near where I live in Tampa at two major intersections.

Being that I'm a road nerd I did some research about these cams and found that yes, there are those who feel they do more harm than good. More on that in a moment.

I learned a new driving term today called "platooning". This is a made-up word (albeit mismatched) that describes the following scenario:

This has to be drawn out else it's difficult to explain, follow along with my crappy diagram below. 🙂 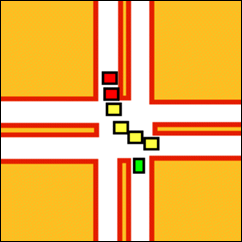 The green box is you. You are stopped and waiting for the green light so you can cross.

The yellow boxes are cars that legally took a left turn while the directional light on their side was green.

The red boxes are morons who continued to follow the other cars after the light turned red again and made an illegal turn. These people are platooning.

Your light is green but you have to wait until the "platooners" get thru because they're directly blocking your way.

I said a moment ago that platooning is a mismatched word to describe this way of driving - and it is. A more proper word would be stampeding because it more accurately describes what's going on. A "herd" of cars is following the line and the last few stragglers stampede their way thru. Makes more sense to me especially considering one of the definitions for stampede literally is "To flee in a headlong rush." Yep, that pretty much describes it.

It also should be noted stampeding isn't just for directional lanes. Some fools stampede on thru lanes.

Stampeders are a very common occurrence in Tampa, so much so that people just expect it. Under normal conditions you'll get one to two stampeders. During heavy traffic, three to five. It happens at any major intersection.

The stampeder does what he or she does for no other reason that they can get away with it every time. Nobody on the other side of the intersection is going to stomp the gas head-on into a stream of other cars, so said stampeder deems the risk of an accident minimal at best.

But that's not a correct assumption. Check this out: 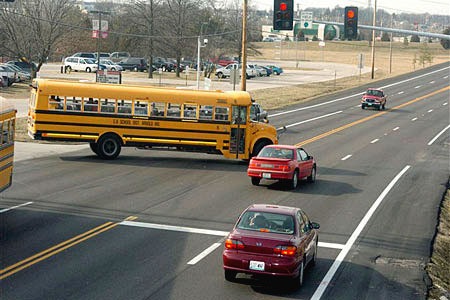 Photo from this article

The guy in the red car pictured above almost directly hit a school bus' front quarter. He didn't but darn near did. You can watch the video of it here.

There is never a "safe" time to run a red-light. Ever.

Back in March an article ran that said a USF study found that red-light cams increase accidents rather than prevent them.

Yes it is - but only for two very specific reasons.

1. The locals aren't used to the cams being there so yeah, they're going to be hesitant when going to an intersection. This increases accidents, no question.

2. The red and yellow light times are way too long. The red-light wait causes people to get anxious and ticked off, the yellow-light times give a glimmer of hope that you'll maybe make it thru the intersection, so of course people are going to stomp the gas to try and make it thru.

The solution to this isn't red-light cams because they just don't work. Instead what should happen is that the times set on the lights should be made shorter. If you shaved off just one second for each time (the red, yellow and green) it would keep things flowing a lot better.