I am so much of a mobile GPS fan (and just GPS in general) that it literally annoys some people. Every time the subject comes up in conversation I sometimes have to restrain myself else I will just keep blabbin' away about it.

I figured it was about time to write up why I'm such a fan of it; you'll be able to understand better why I champion the technology so much.

(This post is more or less a combination of things I've written about GPS before - just so you know. If you've read past articles you will see things here mentioned previously.)

Most people live within a 15-mile radius. That is literally your local circle. Everything you do is inside it. It's where you live and work. It's also where you shop and do the normal activities of life.

Bear in mind a 15-mile radius is a large chunk of space. Doesn't sound like much but it does take up quite a distance.

Here's an example from the (rough) center of Tampa: 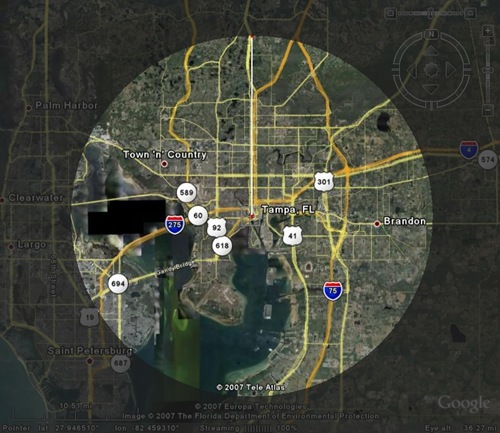 The circle seen in the middle is the radius. It covers several towns and a bunch of roads including major interstates.

Generally speaking (and this is no matter where you are), a 15-mile drive takes about a half-hour's worth of driving. For most people that's a semi-long trip.

Chances are you rarely go outside your local circle.

And why would you?

People only know some of their circle

What's the most interesting thing about the circle aside from the fact most people don't travel outside it?

It's that they only know a small portion of it. Were I to guess, probably less than 30%.

Let's say the "fan" of what someone knows in their circle is the northwestern (i.e. the upper left) corner. If you blindfolded that person, drove them to the southeastern part - a place only 15 miles from where that person was - take off the blindfold, then say "Okay, take the wheel and drive back to where we were", that person most likely wouldn't have the first clue where to go.

Is this an unlikely situation? Not really.

What if you had to go somewhere you'd never been before in the opposite direction of what you're familiar with, then on the way back had to be diverted off the highway because of construction and couldn't get back on?

It's the same as the blindfolded situation. You'd be absolutely lost.

Bear in mind this is only a 15-mile distance.

"Everything looks the same" scenario

What previously used to get me lost more than anything else were situations where everything looked alike.

Have you ever thought about why people give directions by way of landmarks?

It's because they're distinctively different compared to the rest of the landscape and easy to spot.

Have you ever been driving around in a town you're not familiar with and keep going in circles because all the roads and houses look the same?

It's because they do.

Without some sort of landmark it's very easy to lose your way.

Over-reliance on the highway

Everyone, and I mean everyone, has said this to themselves many times:

All I want to do is get back on the highway...

The highway/interstate can easily be just as annoying as it is convenient.

Convenience: It's very easy to get to.

Annoyance: It's usually the only way you know to get to wherever it is you're going.

If you solely rely on the highway to get places, you're in a trap. Why? Because everyone else uses the highway, too. What possible good is the speed and convenience of the highway if it's always choked up with cars that slow it down making it take a longer period of time to get to places?

Fear is a path to the dark side, as Yoda says.

The little green guy is right.

I don't care how strong of a constitution you have; the fact of the matter is people absolutely positively will not learn new ways to get places because of fear. This means you're stuck on the same ol' roads you always take. Those roads are your dark side paths.

Not knowing where you are causes anxiety to varying degrees. For some it causes outright panic. No matter what level of anxiety you feel (which turns to anger, another dark side trait), the moment it occurs you are a hazard behind the wheel. Less concentration is placed on the road and more on the I-gotta-get-out-of-here mode of thinking.

There's absolutely nothing good about it.

Do you dare go where others fear to tread?

If you don't have GPS and are not a big-rig driver, it's very unlikely you would.

You live in your circle, know a piece of it and that's as far as you go. Maybe you take a vacation every so often. Maybe you visit "far away" relatives - but that's it.

This, above all else, is what GPS is best for.

Simply put, you're never lost. Any anxiety you would ever have about not knowing where you are will never happen, period.

Let's say you always go to the same department store whenever you need to buy certain stuff. Maybe there's another department store on the other side of town that you don't know exists. Guess what - the GPS will and will tell you how to get there. For the same amount of driving you might save some bucks.

Do you take the highway to go to work at all? Wouldn't it be cool if you could avoid it entirely? You can. All mobile GPS units I know of have "avoidance" options that includes highways and toll roads.

GPS breaks you out of your circle

Have you ever wondered what's out there?

Is there a world beyond your 15-mile radius?

If you live in the USA like I do, you know full well that this place is frickin' huge.

And you probably only know 15 miles of it.

Ask anyone what they would like to do someday and you usually hear:

You've probably said this yourself.

You can start small by going to places outside your circle. Then go farther and see how far you get.

Put it this way, it got me to Florida; a place well over 1000 miles away from where I used to live.

You wanted a guide? GPS is it. All anyone ever wants is a little help getting to new and interesting places. GPS is a huge help. Bigger than you can possibly know unless you've used it.

And remember: GPS is free. You buy a receiver like a Garmin StreetPilot, which is a one-time cost, put it in the car, and go. No subscriber fees. It's a public good by Uncle Sam.

That's it. It literally is that simple.

Do you know of anything else you can buy for (soon-to-be under) 250 bucks that gives you that sort of freedom?