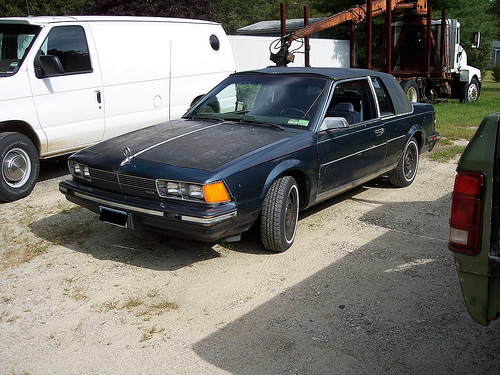 Ben is a long-time friend who still resides at the stomping grounds and while true he is Mr. Dodge A-100 (and general Mopar fanatic), he does pick up “fun” cars from time to time and the above is one of them – a 1987 Buick Century.

This Century was acquired for $300. It had been sitting under an oak tree for God knows how long and was covered was nature’s “crap”. This car is equipped with the Iron Duke 2.8 V6 and is actually loaded with options (including powered antenna mast, power seats, etc.) However this doesn’t take away from the fact the car is a complete piece of crap. 🙂 And that’s why he bought it to begin with.

If the hood ornament doesn’t look stock it’s because it isn’t. Ben acquired  a late 50s Buick hood ornament (which is ginormous) off eBay for under 5 bucks and then epoxy’d it to the hood.

The fate of this car is uncertain, however it will probably turn into something like this (his last “fun” car). He has considered turning it into a “golf” car and sticking astroturf over every single piece of sheetmetal (and no I’m not kidding), placing a hollowed-out golf ball on the end of the antenna mast and a few other choice “improvements”. Going to be a barrel of laughs – no doubt about it.

My suggestion was to use mailbox lettering and to put “THIS IS A COOL CAR” across the top of the windshield – which may happen.

Whatever the result, this will be a fun one for sure.