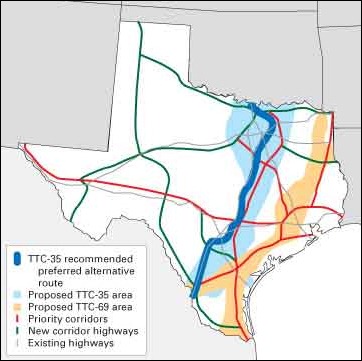 There are certain things I read about that are such huge kluges that I can't imagine what idiot would ever propose them.

One such example is the Trans-Texas Corridor, commonly known as the TTC.

A few definitions before continuing:

The TTC is a corridor which is supposed to be part of a 4,000 mile supercorridor that starts in Mexico, runs through the USA and ends in Canada. Or at least that's how I think it's supposed to work. And yes, this means that this supercorridor would in fact be longer compared to the entire width of the United States.

TTC was supposed to be a big honkin' road. We're talking 1,200 feet wide that has roads for freight, passenger cars and high-speed rail. It would also carry utilities such as electricity and data communications.

You'll note I said was supposed to be big. Well, now it won't be. Or at least not for a long time. Texas residents went positively berserk at the idea, protested the living crap out of it (which they did in droves), and last year the grand idea of the all-in-one super-duper-pooper road was scrapped because the project is just too unrealistic. Thank God.

One of the complaints that was made - which evidently the designers never considered - was the at peak usage of the day with all lanes in use and the rail running full speed, nothing within a mile of it could live because of the noise pollution.

Let me spell out what that means.

There would be absolutely nothing on either side of the road. Not even birds would go near it. Houses and communities nearby would be abandoned because of the noise. Exit roads would have to be extended just to get to inhabited places. Over time the land may never go green again after construction is completed.

The TTC is still going to be built, but definitely not as the original plan suggested. It will be constructed the way we've always done highways - build to suit. This has always worked. Maybe it's not perfect, but it seems to have taken care of the job so far.